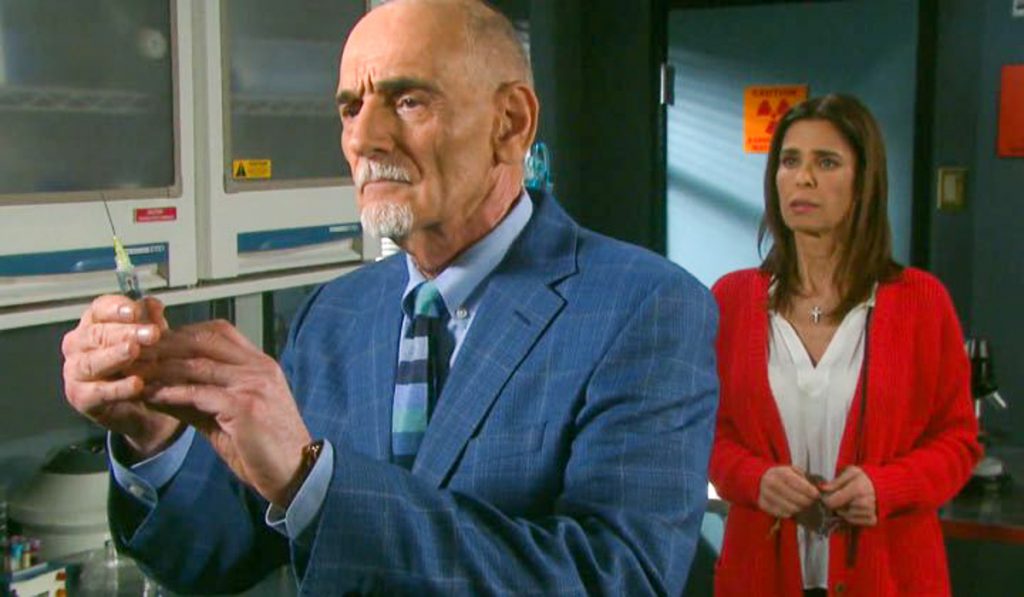 Days of Our Lives spoilers reveal there will be a major catastrophe in Salem. While details are still under wraps, there are a few theories. One is that Dr. Rolf (William Utay) is setting up something sinister for the town of Salem. Could this be the top secret project he has been working on?

DOOL spoilers tease that Dr. Rolf wasn’t just working on the resurrection serum. He admitted to working on other top-secret projects in the hospital lab. While one of them appears to be getting revenge on Hope Brady (Kristian Alfonso), that can’t be the only one. Could he be working on getting revenge for Stefano DiMera (Joseph Mascolo) by targeting the town of Salem?

As Dr. Rolf’s involvement with Kristen DiMera (Stacy Haiduk) lessens, there must be a reason for him sticking around. Even John Black (Drake Hogestyn) wondered why the mad scientist continued hanging around. Perhaps this is a clue that something big is about to happen.

In the latest issue of CBS Soaps in Depth, it was stated that fans should expect a major catastrophe. No details were released, but it was made clear that it would affect several families in Salem. These characters, who might be at odds with each other, would have to band together due to the crisis.

Days of Our Lives Spoilers – Sinister Scheme Has Several Suspects

Days of Our Lives spoilers reveal that Dr. Rolf is not the only one with perilous plans. There are other characters that have less than noble intentions. One of them is Jordan Ridgeway (Chrishell Hartley), who could end up joining forces with Claire Brady (Olivia Rose Keegan).

Of course, Kristen could also get involved too. Especially if her plan to get back Brady Black (Eric Martsolf) fails. She might feel that she has nothing left and targets her anger on the people who despise her — which is practically the entire town.

Another possibility is that Gabi Hernandez DiMera (Camila Banus) could go into a rageful psychosis. In her state of extreme grief, she had a conspiracy theory that everyone wanted Stefan DiMera (Brandon Barash) dead. There are a lot of suspects, each with their own story of why they would want revenge.