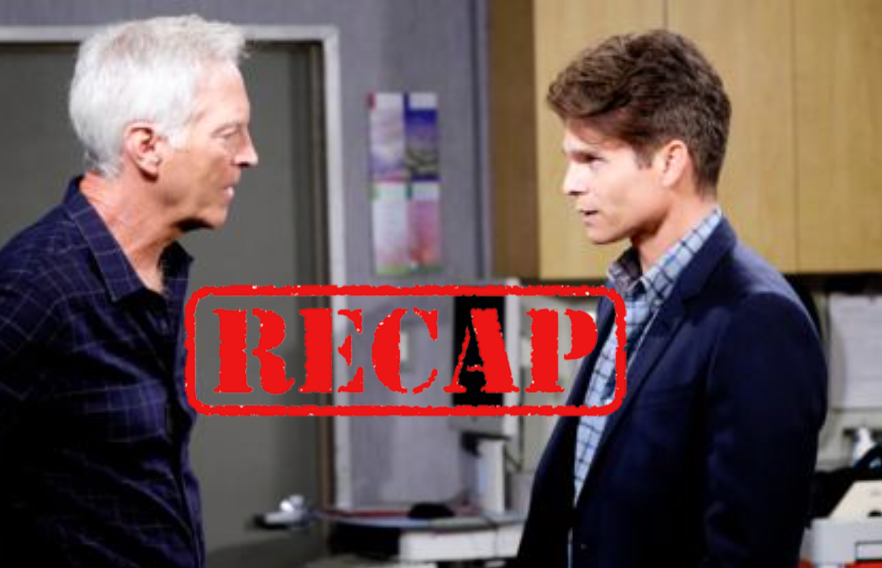 Julie is happy that Ciara is out of the hospital and doing better. Julie starts to talk about Ben Weston (Robert Scott Wilson); she doesn’t like him. Ciara stops Julie and tells her Ben broke off their relationship. Ciara tells Julie how upset Ben was after saving her from Jordan. Ciara tells Julie that Ben thinks he may be a danger to her. Ciara thinks Ben will eventually become the monster he perceives himself to be. Julie knows Ciara wants to save Ben.

Julie wants to know why Ciara would saddle herself with Ben. Ciara tells Julie she is hypocritical. Caira reminds Julie that Abby Dimera (ex-Kate Mansi) is mentally ill and is happy now. Ciara questions why Ben is different than Abby if the residents of Salem would stop treating him like a criminal he might not feel like one.

Julie tells Ciara she is like her parents, Bo Brady (ex-Peter Reckell) and Hope Brady (Kristian Alfonso) were always willing to give people a second chance. Julie asks about third and fourth chances. Julie tells Ciara that Ben is working for Stefan Dimera (Tyler Christopher) again. Ciara understands why Ben would take the job with Stefan back; he is the only one who would hire him.

The single ladies of Salem are thirsty this spring. #DAYS pic.twitter.com/LlUWXfk6Is

Days of Our Lives’ Leo Stark (Greg Rikaart) asks Ben out for a drink. Ben turns Leo down. Leo needs to see if he has a new Daddy. Ben asks Stefan if it was ok to let Leo in and updates him on security matters. Stefan encourages Ben to do something to clear his head. Stefan asks Ben of being determined to stay away from Ciara. Ben believes he may snap and hurt Ciara.

What does the future hold for these two? #DAYS pic.twitter.com/8j7u6XDdl1

Days of Our Lives’ Kayla Johnson (Mary Beth Evans) tells John Black (Drake Hogestyn) that Marlena Evans (Deidre Hall) is back in her room. Diana Cooper (Judith Chapman) offers to go with John, but he wants to be alone. Diana offers to get food for John and hopes Marlena will be dead when she returns. John blames himself for Marlena’s attack, Kayla tries to reassure him. John talks to Marlena and tries to her to wake up. Leo arrives to speak to John. Leo asks about Marlena’s condition and the DNA results.

Days Of Our Lives Spoilers For Friday, March 8: Stefan Makes His Move– Leo Learns The Truth#DAYS#DOOL#DaysOfOurLiveshttps://t.co/8os1kOHZuv

Leo changes the subject and asks about John’s hobbies. John tells Leo his past if hard to explain. John tells Leo how Marlena has always been his anchor. Marlena flatlines, and John yells for Kayla to help. Kayla tries to get John to leave the room, but he refuses. Kayla shocks Marlena several times before stopping, John begs her to continue. Kayla tells John she’s sorry.

Days of Our Lives’ Brady Black (Eric Martsolf) catches Eric Brady (Greg Vaughan) and Sarah Horton (Linsey Godfrey) kissing. Rex Brady (Kyle Lowder) comes into the chapel and asks what is going on with them. Brady tells every that Kristen Dimera (Stacy Haiduk) is alive and attacked Marlena. Rex offers to help any way he can. Brady and Eric leave Sarah and Rex to talk.

Rex tells Sarah he is worried about Eric. Sarah says Eric is worried about his mom; she hopes she didn’t make things worse. Rex is sure Sarah helped Eric, not hurt him. Rex tells Sarah about Brady’s earlier comments. Rex isn’t afraid that Sarah would go after his brother. Sarah tells Rex that Eric has never made a move on her. Rex tells Sarah Brady’s words are what worries him. Rex promises not to let Brady come between him and Eric. Rex questions if Sarah has changed her mind about his proposal. Rex asks if Sarah knows how much he loves her. Rex can’t wait for Sarah to marry him. 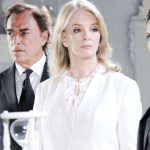 Days of Our Lives’ Brady and Eric want to check on Marlena. Eric wants to explain what Brady walked in on in the chapel. Brady accuses Eric of going after Sarah. Eric tells Brady he is not pursuing Sarah. Brady asks if Sarah is pursuing Eric. Eric tells Brady to do the decent thing for everyone and stay quiet. Eric begs Brady to keep quiet. Rex tells Eric and Brady that something is wrong with Marlena. Brady agrees to keep quiet.

Days Of Our Lives Leo Give Diana News

Days of Our Lives Diana is at the pub waiting. Diana daydreams that Marlena dies after telling John to move on with someone else. Diana dreams that John wants to be a family with Leo and herself. Diana and John kiss, he pulls away and covers Marlena’s face before kissing her again. Leo runs into Diana and tells her to leave John alone, Marlena just flatlined. Marlena says that is awful, Leo doesn’t believe her concern.