Days Of Our Lives Spoilers: Eric Makes A Bargain With God – Vows To Give Up Sarah If Marlena Lives

Days of Our Lives (DOOL) spoilers tease that Eric Brady (Greg Vaughan) will make a big promise. He’s been in serious angst lately, since he’s been developing feelings for Sarah Horton (Linsey Godfrey). The only problem is that Sarah is the girlfriend of his brother, Rex Brady (Kyle Lowder), and so she’s basically off-limits to him.

But still, there’s a strong pull between Eric and Sarah. The two started to bond after Nicole Walker’s (Arianne Zucker) death and Eric returned to Salem with Holly Jonas (Harlow and Scarlett Mallory). Their respective feelings have grown since then, and now the two of them are falling in love with each other.

But so far, neither of them has really stated their feelings to the other, or acted on their feelings. But that will soon change. Marlena Evans (Deidre Hall) will be hospitalized and in a coma after being poisoned by Diana Cooper (Judith Chapman). Eric will be deeply worried about his mother and Sarah will be close by to offer him comfort. 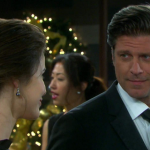 Why not? Well, after Marlena falls ill, things will be looking very bad for her. She’ll be near death, and Eric will decide to make a bargain with God. He’ll vow to never go near Sarah again if God spares his mother and Marlena pulls through.

Of course, we know that Marlena will pull through, as Deidre Hall has no plans of leaving Days. And Eric is a religious man, so he’ll take his promise to God seriously. So, look for Eric to shut Sarah down when she approaches him to profess her feelings.

Sarah will likely be devastated by Eric’s rejection and will probably resign herself to making things work with Rex as a result. And since Nicole will be back in a few weeks, it is looking doubtful that Eric and Sarah will ever get together, even for a short time. Do you think we’ll ever see the two of them together?