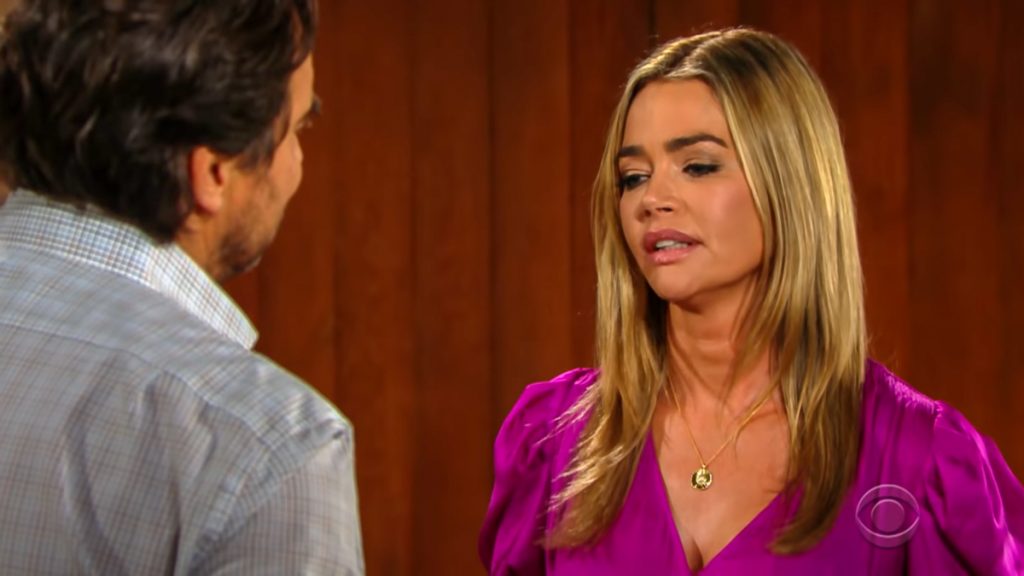 The Bold and the Beautiful spoilers tease that Shauna Fulton (Denise Richards) liked Ridge Forrester (Thorsten Kaye) from the moment she saw him. But Shauna’s accurate assessment of the issues Ridge is having with Brooke Logan Forrester (Katherine Kelly Lang) turned physical appeal into relationship intent.

Ridge chose not to fight Flo Fulton’s (Katrina Bowden) immunity deal in order to shield his son, Thomas Forrester (Matthew Atkinson), from legal justice. That decision sparked immeasurable gratitude in Shauna’s heart and caused her to fall in love with Kaye’s character.

Now, as Ridge and his wife continue to be split by problems their children are involved in, Shauna stands to gain the most. Hope Logan’s (Annika Noelle) unintended action, which caused Thomas to appear to die, has sparked an intense battle between Ridge and Brooke. And with that, Bridge’s differences may be irreconcilable.

B&B viewers recall that Ridge and Quinn Forrester (Rena Sofer) once shared kisses that Brooke became aware of. However, Bridge eventually reconciled and their marriage has been solid ever since.

If it were a year ago, Shauna wouldn’t do more than catch Ridge’s eye as an appealing lady. But he would never entertain thoughts of being with her, or choosing to return her kiss. Plus, Ridge never would have stormed out of Brooke’s estate and downed far too much liquid courage at Bikini Bar, which was the genesis of what may actually become Shidge (Shauna plus Ridge). 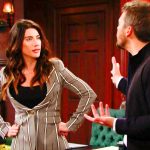 Due to her own experience in taking Ridge away from Taylor Hayes (Hunter Tylo) and because of Ridge’s past indiscretions during the various versions of Bridge that have played out through the years, Brooke recognized Shauna as an adversary early on.

Brooke came to distrust Shauna as soon as Flo was linked to the Beth Spencer (Madeline Valdez and River Davidson) debacle. More than a few choice words were exchanged, with the Logan family welcome being revoked as well.

The Bold and The Beautiful Spoilers: Hope and Liam Spend Thanksgiving With Douglas – Asks Where His Daddy Is? @celebratesoaps https://t.co/9GYIehS2ii

Ridge has free will. At any point in time he could have pushed Shauna off, or at the very least not allowed himself to discuss the intimate details of his life with someone other than his wife. But Ridge did that, making him the one who first crossed the Bridge line of trust.

Brooke has actually been trying to enforce tough love. Her attempts to get through to Ridge about the danger Thomas represents is a form of protection.

Misinterpreted parental instinct continues to cause Ridge to believe that Brooke isn’t supporting him. That’s the wedge issue Richards’ character recognizes and continues to exploit as part of her plan to replace Brooke as Ridge’s next significant other, or possible wife.