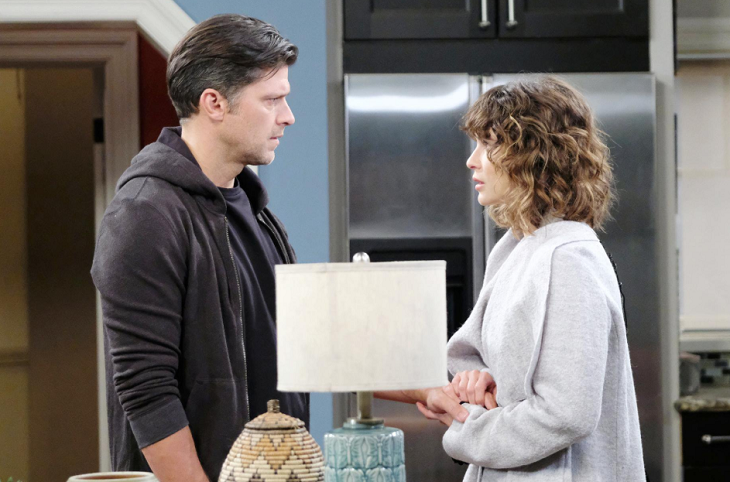 Days of Our Lives (DOOL) spoilers tease that Brady Black (Eric Martsolf) will soon issue a big warning to Rex Brady (Kyle Lowder). Rex is totally into his love Sarah Horton (Linsey Godfrey) and will do just about anything to make her his bride again. He even re-proposed to Sarah recently, but she said no and said that she wanted to give their relationship some more time before they hopped into another engagement.

But the real reason for Sarah’s rejection of Rex’s proposal is Rex’s brother, Eric Brady (Greg Vaughan). Sarah and Eric have grown close in the past few months, and while Rex was away in Chicago tending to Mimi Lockhart (Farah Fath) and their baby, Sarah was cozying up to Eric.

Now Rex is trying to get Eric to help him convince Sarah to accept his marriage proposal. Of course, Rex is oblivious to the fact that Sarah and Eric have developed secret feelings for each other, but he’ll soon get a big clue about the whole situation.

And that’s where Brady comes in. Brady and Rex will have a talk, and Brady will learn just how close Sarah and Eric have become. That will interest Brady, because it was Eric who “befriended” and then stole Nicole Walker (Arianne Zucker) away from him. Brady’s still peeved at Eric about that whole situation.

Days Of Our Lives Spoilers: Will JJ Marry Haley To Keep Her From Being Deported?

And so Brady will offer Rex some much-needed advice. He’ll clue Rex in on how Eric pursued Nicole when Nicole was with him, and how he ultimately stole Nicole. But how will Rex respond to Brady’s tale of brotherly deception? He may simply brush off the suggestion that Eric could be after Sarah, thinking that his brother would never do that to him,

Days Of Our Lives – When Will The Truth Come Out?

Or he may start to get skeptical about Eric’s behavior lately. He’s certainly noticed that Eric and Sarah have a solid friendship, but he may start to wonder whether there could be more going on under the surface. Perhaps Rex will get suspicious of Brady and confront him about his feelings for Sarah. But would Eric come clean if pressed?

What happens with these three remains to be seen, but it seems that at some point, the truth about Eric and Sarah’ feelings for each other is going to come out. Could we be looking at another brotherly feud, this time between Rex and Eric?

Days Of Our Lives Spoilers: Claire Desperate To Send Haley Away — Gets Help From Eve To Expose Her#DOOL#DAYS#DaysOfOurLiveshttps://t.co/d8cxm9EH0g