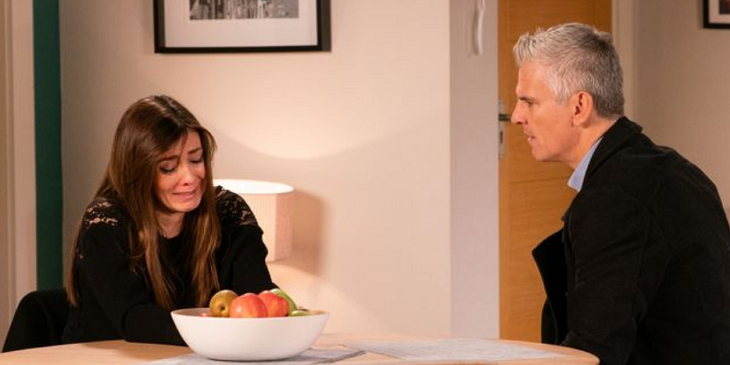 Just when things couldn’t get any worse for the Connor family, it just did. New Coronation Street spoilers indicate that Michelle Connor (Kym Marsh) will learn something that will definitely change the course of her future on her wedding day.

That’s because Robert Preston (Tristan Gemmill) is having a baby with another woman! Here’s what you need to know.

Michelle will be left stunned when she learns that her fiancé is the father of another woman’s baby. That’s because Robert had a brief fling with Vicky Jeffries (Kerri Quinn), who is the mother of the troublesome teenager Tyler Jeffries (Will Barnett). Needless to say, this is going to rock Michelle’s world.

“This fling takes place while Michelle and Robert temporarily split up, then when they’re reunited they decide to have a secret wedding, by inviting guests on the premise it’s for his 50th birthday,” an insider close to the situation told Britain’s The Sun.

“But Vicky reveals she is pregnant with his baby, which poses a real dilemma for him as he has always wanted to be a father.”

The insider further goes on to say that this storyline will tie in with Kym Marsh’s exit. The stunning actress is set to leave Coronation Street after having spent the last 13 years on the show.

Michelle has seen plenty of things throughout her time on the cobbles including two brothers dying, a stalker, her son swapped at birth and a stillborn baby.

The tipster added, “That leaves him with a huge decision over whether he stays with Michelle, the woman he loves but who doesn’t want a baby, or leaves her to guarantee a new life as a father? Either way, it results in Michelle leaving the cobbles for good — but not before the inevitable whirlwind of drama has played out.”

And while Coronation Street fans would hope that Michelle would get the happy ending that she deserves, it doesn’t look like that will happen. Her final storyline is going to be the most shocking yet! Needless to say, fans will have to tune in to find out what will happen next!