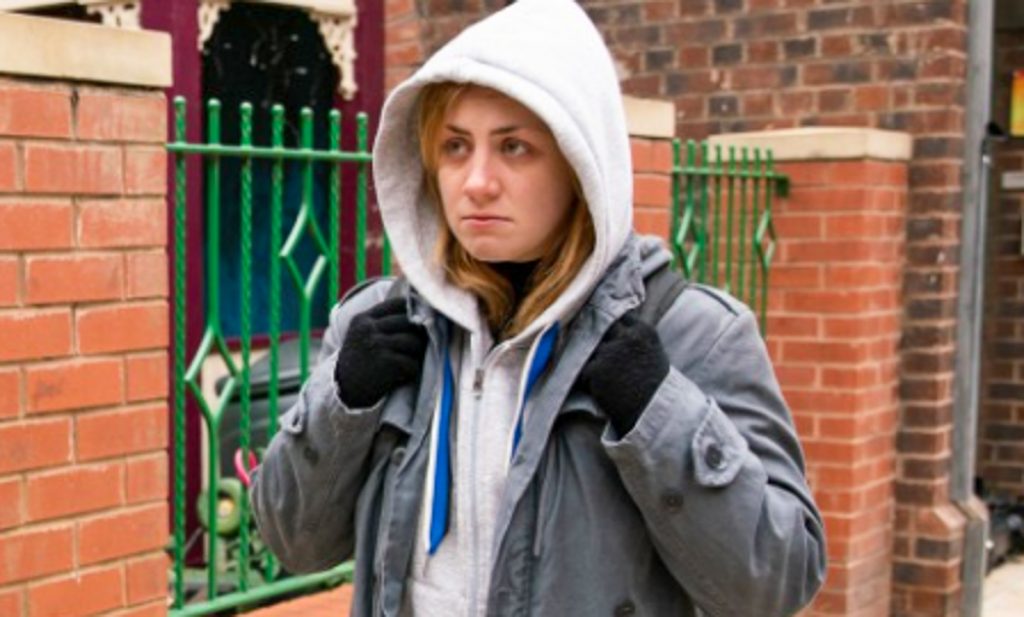 Coronation Street spoilers teased that Fiona “Fiz” Stape (Jennie McAlpine) would go through an interesting and concerning storyline. That coincided with newcomer Jade Rowan (Lottie Henshall) coming into Fiz’s house as a nanny, but under false pretenses. New information reveals Fiz will once again offer Jade a home. Is this a big mistake or could we be seeing a redemption storyline down the road?

Corrie spoilers recently confirmed what fans had been speculating for weeks. That Jade is serial killer John Stape’s (Graeme Hawley) daughter. As fans recall, John and Fiz were married at one time. This would certainly explain Jade causing all the problems she has for Fiz. Of course, Fiz was blinded to a lot of it, not Evelyn Plummer (Maureen Lipman).

Fans thought that Fiz escaped a bullet when she told Jade her nanny services were no longer needed. Unknown to her though, Jade hinted that Fiz was abusive when she took the little girl she was caring for to the hospital.

As fans remember, one of Jade’s “games” was to put makeup on the girl’s arms and take pictures. They looked like bruises, but viewers know it was just cosmetics. Making it even worse is that same day, Fiz broke a tablet out of frustration.

Coronation Street spoilers reveal Fiz is going to make a huge mistake and bring Jade back into her home. She still is unaware that Jade is John’s daughter and her intentions are pure evil. However, the one person that could sense Jade’s wickedness was Evelyn, everyone’s favorite sassy and snappy senior citizen.

It is suggested that not only will Evelyn find out exactly what Jade is hiding, but there could be a positive resolution to this storyline. Remember, Jade was told that Fiz was a bad person. The whole reason she is doing these evil deeds is not to punish Fiz, but to keep Hope safe.

This seems to indicate that Jade has good intentions deep down. Perhaps once she realizes that Fiz is a good person and the bad one was John, it can be a chance for the character to be redeemed.