Sam Aston, the actor who plays Chesney Brown, revealed that eight babies are joining the set of Coronation Street as the show moves along with his alter ego and Gemma Winter’s (Dolly Rose Campbell) quadruplets storyline. Although they only need four babies, the show requires twice the number for doubles and filming rotation purposes.

In an interview with This Morning on Monday (June 17), Aston told show presenters Phillip Schofield and Holly Willoughby that “Normally when you have a baby, you have twins; I imagine you have to have double… so eight babies!” Imagine being surrounded by eight babies! He said confidently that the huge addition to the cast didn’t scare him at all. “I am an uncle to 15 so I’m used to chaos!” he explained.

Meanwhile, Aston admitted when asked about his character’s relationship with Gemma that the pair are soulmates. He added, “Chesney has had a couple of flings and things like that, but with Gemma, they seem to connect. I know they’re very opposite and opposites attract. They are a bit of chalk and cheese, but they do seem to work.” He also confessed that he has no idea how Chesney and Gemma will be able to cope and simply teased, “It’s going to be tough.” 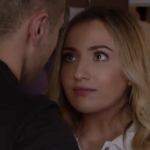 Viewers of Coronation Street may remember that Chesney and Gemma were shocked when they were told that they are expecting quadruplets when the latter had her baby scan. Gemma, who has a twin, had warned Chesney early on that multiple births run their family. But she certainly didn’t expect four! Still reeling from the shocking news, the pair were given an alternative, which was selective termination. But, they both decided to keep all of their babies.

Coronation Street's @SamAston93 explains why he thinks Chesney and Gemma are ‘soulmates’ and why their newest storyline could mean having EIGHT babies on set! 👶 @itvcorrie pic.twitter.com/oD3XwP1LVU

Although Chesney vowed that he’ll always be by Gemma’s side, the pair are set to face a lot of challenges, in all aspects of life, along the way. With the decision of keeping a huge family, they need to determine where they will get the finances to support their kids. Although their neighbors are more than happy to offer help, the pair will be needing more once they start raising four kids.

General Hospital Spoilers: Lulu Misreads A Situation — Does It Have To Do With Dante’s Whereabouts?