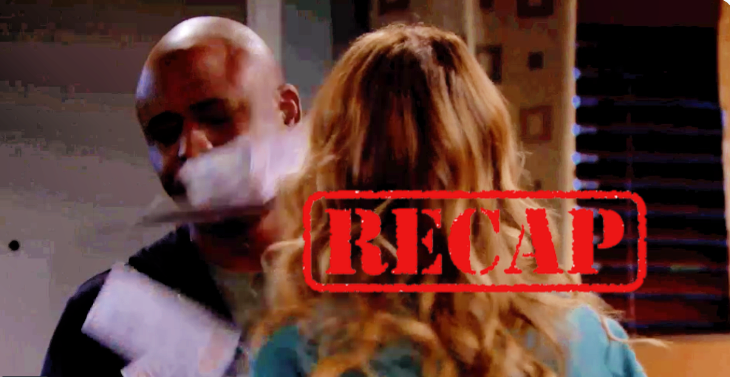 She knows Reese came all this way to keep her quiet and it’s not happening. Flo rehashes Reese stealing a baby for a gambling debt. She throws her cash at him and exclaims helping him was the worst decision of her life. Every time she closes her eyes, she sees Hope with her heart ripped out.

Reese insists they both know who he is then he adds he’s a good man who got caught up in something he couldn’t control and was trying to protect Zoe Buckingham (Kiara Barnes). He protests that the truth cannot get out and becomes dramatic as he re-tells how he was forced to do the hardest thing he ever had to do.

Flo’s ready to go all in and tell the truth. #BoldandBeautiful pic.twitter.com/d1USHNXmtr

Zoe cries as he apologizes and says he could only think of keeping her safe. Flo argues with Reese whether Hope will heal and have another child and accuses him of just trying to protect himself. Reese wants Flo to return to Las Vegas and Zoe to convince Hope to have another child.

Bold And The Beautiful Spoilers – Zoe Agrees To Keep Silent

Zoe decides her dad’s right – they’ll all go to prison. No one can ever know. Reese embraces Zoe then says she should never doubt his love then leaves. Flo swipes everything off the desk in anger then argues with Zoe and says she’s not going back to Vegas. Zoe pleads with Flo, who won’t promise not to tell Hope.

At the cabin, Hope and Liam Spencer (Scott Clifton) discuss Flo. Liam was impressed that Sally Spectra (Courtney Hope) showed no jealousy. There’s a knock and it’s Tiffany (Maile Brady) dropping off the new designs for Hope for the Future. She tells Hope how sorry she is about her little girl before leaving.

After, Hope knows she meant well, but it was another reminder Beth isn’t here. She tells Liam she’d like to get to know Flo better she insisted Hope was meant to be a mother. He assures Hope she’ll always be Beth’s mom and there’s no limit to the love she has to give a child. He feels there’s a child waiting to be loved by Hope.

At the beach house, Sally takes Wyatt Spencer’s (Darin Brooks) phone and he playfully kisses her and snatches it back. He has a text from Liam Spencer, thanking them for the dinner party. Wyatt thinks Sally was the consummate hostess – he’s proud of her for ‘going with the Flo’. Sally mocks him for his bad puns and they joke about whether his exes left him for his humor.

Talk turns to Bill Spencer (Don Diamont) and Sally wonders since they haven’t heard from him if he has changed his mind. Wyatt reassures her. They go over Wyatt making the offer to Bill before discussing their relationship. Wyatt thinks they’re ‘good’ for the next millennium or two.

Sally marvels she almost gave up on men and everything changed for the better when they got together. She sums up, “I owe it all to you. Chicken legs.” Wyatt’s offended until she clarifies she wants to eat chicken legs. And that’s a wrap. Don’t forget to check often with Soap Opera Spy for all your latest spoilers, news, updates, and much more!