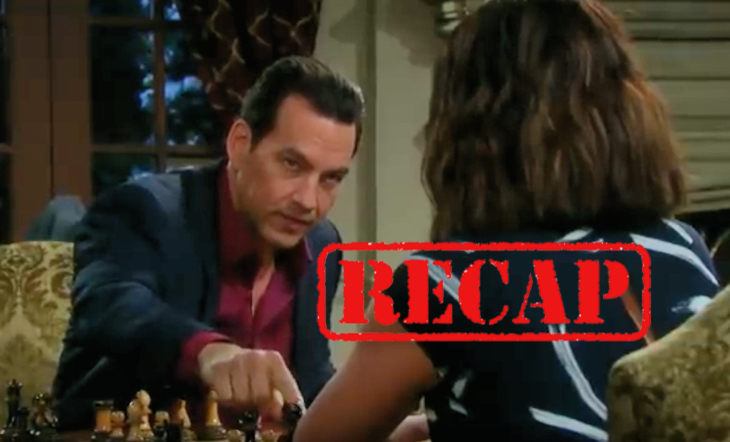 Days of Our Lives (DOOL) recap for Tuesday, March 12, 2019, reveals Sarah (Linsey Godfrey) and Kayla (Mary Beth Evans) are discussing the chaos of the ER shift.

Days of Our Lives Spoilers John Gets The Test Results

They toast to things slowing down and Kayla comments on them jinxing themselves. Kayla tells Sarah that Rex (Kyle Lowder) has applied for a job at the hospital, Sarah is shocked. Kayla offers to schedule Rex and Sarah on different shifts because Sarah seems uncomfortable. Kayla finds the cookies in Marlena’s (Deidre Hall) office and plans to send them to the lab. John (Drake Hogestyn) opens the test results that Kayla finds on Marlena’s desk, and it says he is Leo’s father.

DOOL Spoilers Marlena Is In Shock

Days of Our Lives John finds Marlena passed out on her office floor. John performs CPR on Marlena in an attempt to revive her. John yells for help, Sarah and Kayla run to assist in Marlena’s office. Sarah calls for a crash team to come to Marlena’s office. John is trying to figure out what happened to her. Kayla figures out that Marlena is having an allergic reaction.

John tells them penicillin is the only thing Marlena is allergic to, and he has no idea how she could have come in contact with it. Marlena is stable but unconscious; John begs her to come back to him. Eric (Greg Vaughan) and Brady (Eric Martsolf) arrive in Marlena’s room. John leaves Eric and Brady to spend time with Marlena while he goes to check out her office. Eric talks to Marlena and tells her he and Brady are together. Brady tells Marlena that he’s going to do his best to get along with Eric. Eric says he would do anything for Marlena.

Days Of Our Lives Spoilers Eric And Brady Argue

Days of Our Lives Eric thanks Rex for lunch. Rex tells Eric he has applied for a job at the hospital and is hoping to buy a house with Sarah. Brady shows up and wants Eric’s help in getting Holly (Harlow and Scarlett Mallory) out of Stefan’s (Tyler Christopher) house. Brady tells Eric that Stefan wants a relationship with Chloe (Nadia Bjorlin) and they need to save her. Both Rex and Eric tell Brady this isn’t about Holly it’s about Brady being jealous. Eric tells Brady that he is the reason Holly is with Chloe.

Days Of Our Lives Spoilers: Rex Wants Eric To Convince Sarah To Marry Him — Brothers Fight For Love?#DOOL#DAYS#DaysOfOurLivershttps://t.co/NEwYAaJKjn

Eric tells Brady he is responsible for Nicole’s (Arianne Zucker) death. Brady blames Eric for going after Nicole. Eric tells Brady to get out of his house. Brady tells Rex that Eric tends to go after his brother’s women. Rex tells Brady that he and Eric are cool. Sarah calls and tells Eric about Marlena, all three leave for the hospital. Eric arrives at the hospital, and Sarah hugs him after updating him on Marlena’s condition. Rex stares at them remembering John’s comment. Sarah tells Rex she didn’t know he was coming and says she is glad to see him. Sarah and Rex discuss him working at the hospital; she wants him to take the job.

Days of Our Lives Stefan and Chloe are playing chess; he beats her again. Chloe wants a rematch, Stefan wants to pick up where they left off. Stefan and Chloe discuss their relationship but are interrupted by Holly’s screams. Chloe rushes upstairs to check on Holly. Chloe brings Holly downstairs to try and calm her down. Chloe is upset because she thought someone grabbed Holly. Stefan promises Chloe nothing will happen to them while they are under his roof. Chloe brings Holly something to drink.

Stefan offers to help calm Holly down. Stefan pulls out his phone and wants to show Holly something. Stefan tells Holly about Charlotte and how he still loves her. Stefan tells Holly that her mommy is still in her heart. Stefan tells her that love is magic and shows her the symbol for heaven. Holly calms down, and Chloe takes her to bed. Stefan breaks down after Chloe walks out of the room. Chloe tells Stefan that Holly is asleep thanks to him. Chloe and Stefan discuss growing up in an orphanage.

Chloe isn’t sure that Nicole did the right thing trusting her to raise Holly. Chloe says the older kids get, the harder it is to raise them, and she dreads them losing their innocence. Stefan doesn’t believe in lying to kids about such things. Stefan wants to move things along, Chloe claims to be tired and tells him goodnight and kisses him on the cheek.

Days Of Our Lives Will Has Good News For Sonny

Days of Our Lives Will (Chandler Massey) comes to visit Sonny (Freddie Smith) and informs him that Leo (Greg Rikaart) has dropped the charges. Will and Sonny kiss to celebrate. Sonny calls Justin (Wally Kurth) who confirms Will’s news; Sonny thinks they can be together now, Will says not quite yet. Will wants to be quiet for now and asks Sonny to go upstairs. Will and Sonny are in bed together; Sonny asks where Leo is, Will doesn’t care. Will’s phone rings, he tries to ignore it, but Sonny wants him to answer. John has called to tell Will about Marlena, and both Will and Sonny rush to the hospital.

In the latest #DAYS, Diana is plotting to get her way. https://t.co/ZsCmioRrzb pic.twitter.com/yegUb9OfSb

Days of Our Lives Diana (Judith Chapman) arrives in her room and finds the evidence missing. Leo comes in behind Diana and shows her the envelope. Leo asks Diana if Richard was his father or is his father, John Black. Diana asks Leo where he got that idea, Leo says from John. Leo demands the truth. Leo demands to know why Diana put them through the abuse from Richard if John was his father.

Leo tells Diana that John isn’t his father; she’s lying to get John back. Diana admits to doing anything to get John back. Leo demands to know why Diana let him grow up believing that the monster was his father. Diana says John was taken; she knew it was time to disappear when Marlena came back. Leo tells Diana she never gave him a dime. Leo says he has made a mess of things and he has nobody or nothing. Diana tells Leo not to give up; she encourages him to fight to be happy. Leo warns Diana that John will be upset if she is lying to him. Diana is sure that John will be happy with the results.

Young and the Restless Spoilers & Recap Tuesday, March 12: The Verdict Is In – Victor Vows To Make Intruder Pay