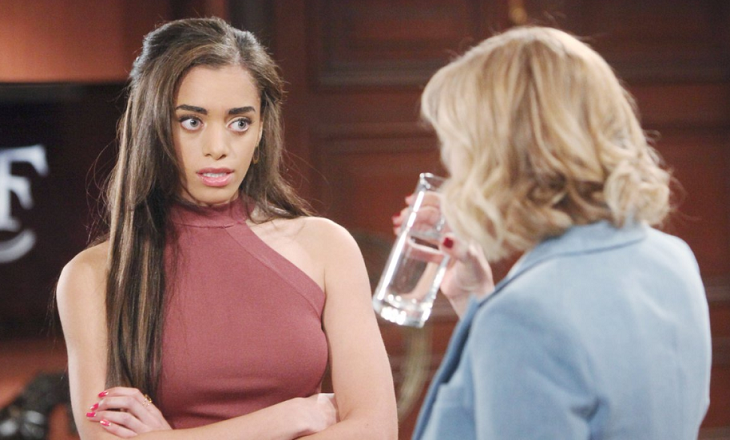 “Bold and the Beautiful” (BB) recap for Thursday, April 25, 2019, reveals that over at Spencer Publications, Katie Logan (Heather Tom) wants to know why Bill Spencer (Don Diamont) asked her to come by.

Bill knows he lost his way for a while but has an idea that will reassure Will about the future in a way nothing else will. Katie asks, “Okay, what’s the idea?” Bill expands that what a boy Will’s age wants most is his mom and dad together. Katie thinks he has both of them as well as a huge family. Bill will never let their son down again. Katie believes him.

They laugh as Bill reveals he’s on seven eligible bachelor lists, though he’s not sure he’s such a great catch. Katie reassures him and they discuss their history. Katie quips that they do divorce well. Bill suddenly stuns her by pulling out an engagement ring. and proposing. He asks, “Will you do me the honor of marrying me again?”

Bold And The Beautiful Spoilers – A Ring And A Rejection

Bill tells her he loves her, and she makes him happy. Katie tears up – he has no idea what it means to hear that he loves her – he stopped saying it once. She worries about disappointing Will if they can’t make it work. Bill insists she can trust him. Katie recalls how much it hurt when he left her for her sister. She thanks him for his words, but she can’t give him the answer he wants. 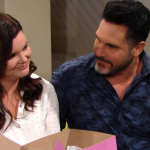 Zoe blurts, “She can’t be.” Brooke wonders what she has against Flo. Zoe notes all she and Hope have in common is missing a child. Brooke says they also share DNA and asks Zoe if she knows something about Flo. Zoe warns about people taking advantage. Brooke’s unconcerned and feels Hope needs a friend right now. Zoe exits and looks horrified. Later, Katie Logan arrives and announces that Bill Spencer proposed. Brooke thinks it’s wonderful, but Katie relays that she said ‘no’.

Bold And The Beautiful Spoilers – Zoe Buckingham On Warpath

At B&B’s Flo Fulton’s place, Shauna Fulton (Denise Richards) wonders what Brooke Logan Forrester’s house is worth and tells Flo that being a member of the Logan family will really change her life. Shauna then tells Flo what a charming gentleman her father Storm Logan (William DeVry) was when they’re together.

Flo wonders why they didn’t stay together. Shauna says he wanted a simple life and a family but felt those things were for someone else. She feels he would have been so proud of his beautiful daughter.

Shauna leaves and Zoe Buckingham arrives to confront Flo about being a Logan. She says if her new family knew her secret, they’d hate her. Flo argues they might forgive her for Storm’s sake. Zoe disagrees and asks what she’s going to do. She barks, “Tell me!”

B&B’s Shauna Fulton runs into Bill Spencer at Il Giardino. He tells her she looks good and they reflect on ‘almost being parents’. Bill muses he would have bought her daughter a house – it’s what he does. Shauna doesn’t think he’s so bad. And that’s a wrap. Don’t forget to check often with Soap Opera Spy for all your soap needs!