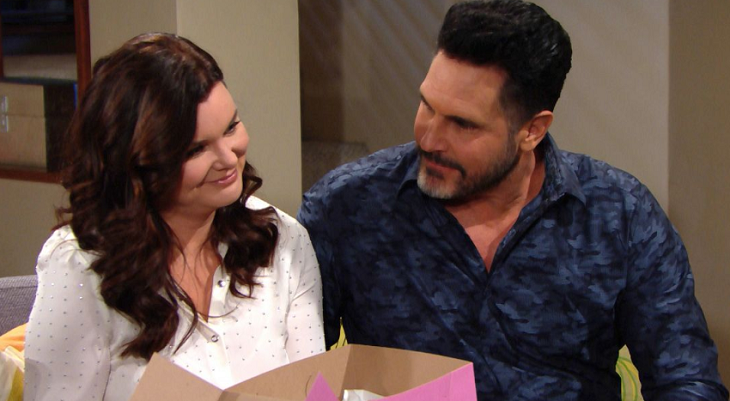 The Bold and the Beautiful (B&B) spoilers tease Katie Logan (Heather Tom) will change her mind about reuniting with Bill Spencer (Don Diamont).

She will worry that it will upset their young son if things don’t work out between them. And, she knows Bill is always looking for something better after he conquers his conquest. Here’s what you need to know about what’s ahead on B&B.

It’s clear that Katie is feeling overwhelmed by the possibility of a romance with Bill again. She worries that it will end badly between them. She still has nightmares about how he left her to be with her sister Brooke Logan (Katherine Kelly Lang), who is now married to Ridge Forrester (Thorsten Kaye).

Bold And The Beautiful Spoilers – Katie Logan Right To Be Worried?

It’s only natural that Katie would have anxiety about opening her heart up to Bill again. The question seems to be, is she right to be worried?

Not long after Katie blocked his marriage proposal, Bill was seen cozying up to Shauna Fulton (Denise Richards), a woman he has a history with. While the conversation with her was innocent, it’s clear that Shauna sees his money as a plus and could begin to throw herself at him.

B&B spoilers state that Brooke will visit Katie and she will try to convince her that Bill’s a changed man and they can finally have their happy ending. Of course, Katie isn’t sure she believes it, partly because part of their problem before was her sister, Brooke.

Bold And The Beautiful Spoilers – Brooke Forrester Affects Her

Brooke admits that she had doubts about Bill’s sincerity at first, but she believes that he wants to build a life with her now. All Katie needs to do is open her heart up to him.

‘Bold And The Beautiful’ Spoilers: Zoe Forms An Unlikely Alliance With Shauna And Flo https://t.co/rang693yZ8 pic.twitter.com/VDC2lyHFMy

Katie will appear to be affected by Brooke’s words. Time will tell if she decides to give her ex-husband another chance.

Do you think Katie should give Bill another chance?