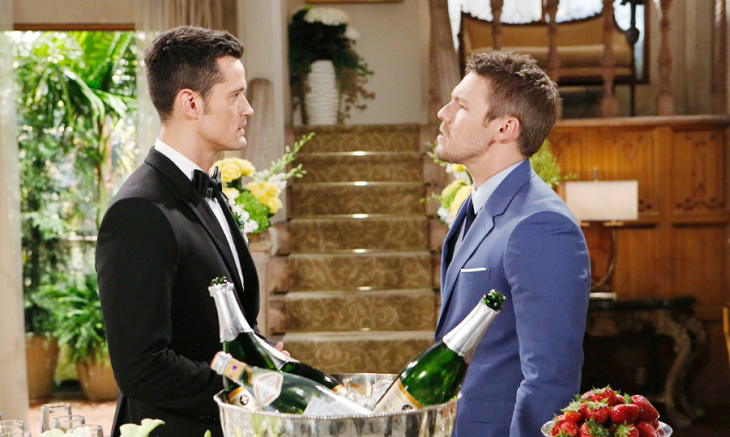 Liam Spencer (Scott Clifton) told Thomas Forrester (Matthew Atkinson) off on ‘The Bold and the Beautiful’. As both awaited Hope Logan (Annika Noelle), Clifton’s fully concerned character made it clear that he would always be available to Hope, when she needed him.

Thomas has been telling various people that he’s not concerned about Liam. But his front is just an attempt to play it cool. As Thomas knows Liam remains a threat to any chance of happiness with Hope.

The rush to the altar was created by Hope’s desire to become Douglas Forrester’s (Henry Joseph Samiri) mother as soon as possible. B&B fans are the only ones who know that Thomas fully manipulated his fiance’s feelings. He rigged a device that projected a ghost in his son’s room, which caused him to shriek in horror.

The pressure to have a wedding during the same week that Hope decided to follow through on her acceptance of becoming Douglas’ new mother and therefore, Thomas’ bride, sent all who are connected to this instant couple into a tizzy.

Liam and Brooke Logan Forrester (Katherine Kelly Lang), in particular, are panicked. They fear that Hope is entering a situation that will hurt her badly. Various others, including Brooke’s sisters, Katie Logan (Heather Tom) and Donna Logan (Jennifer Gareis), along with Eric Forrester (John McCook), and Quinn Forrester (Rena Sofer) were also taken by surprise.

Even the wedding officiant, Carter Walton (Lawrence Saint-Victor), wasn’t expecting to conduct another wedding at this point. Liam is a problem for Thomas, but so is the recent past. As viewers recall Atkinson’s deranged character has committed numerous terrible acts. Any of which would turn Hope’s stomach and her feelings about him.

Bold And The Beautiful Spoilers – The Past Must Bite Thomas Forrester

Thomas has forged an illustration, said to be from Douglas, and a letter that was meant to represent Caroline Spencer’s (Linsey Godfrey) wishes. He forced Emma Barber (Nia Sioux) off Mulholland Drive, which caused her death.

The man who has convinced himself that he’s purely looking out for Hope’s best interests and those of his child’s, also has threatened a group of people who know that Phoebe Forrester (Madeline Valdez and River Davidson) is actually Beth Spencer. And, he drugged Liam, which created a romantic reconnection with Steffy Forrester (Jacqueline MacInnes Wood).

Any of the above referenced items, if exposed, would likely lead to the climax of this storyline. But Hope’s ongoing unawareness of these dealings has served to create Thope, which is all that Thomas wants (for now).