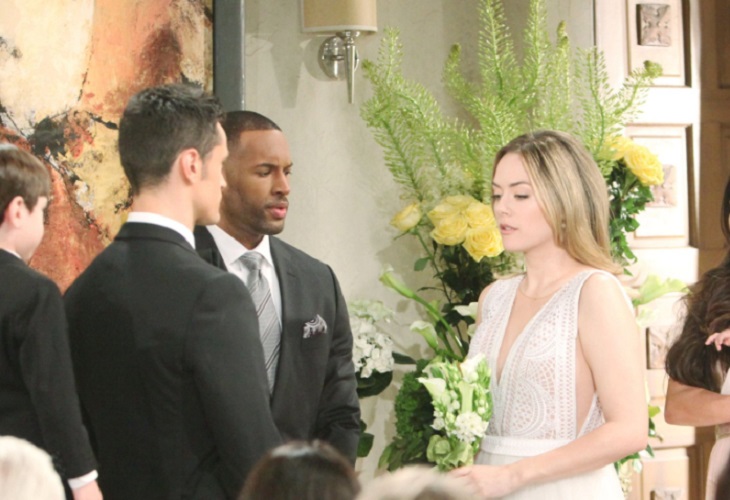 “The Bold and the Beautiful” (BB) spoilers for Monday, July 22, 2019 tease that we will have a day filled with one contemplates their next move, another becomes alarmed, and let’s not forget plenty of drama. We have a very exciting day coming up and you will not want to miss a moment of the action.

Bold and the Beautiful Spoilers – Hope Contemplates Next Move

B&B’s Hope Logan Spencer (Annika Noelle) contemplates her next move after Phoebe interrupts her vows with Thomas Forrester (Matthew Atkinson). Brooke Logan Forrester (Katherine Kelly Lang) recently pleaded to her daughter not to marry Thomas and if that wasn’t enough to have her overthinking things, baby Phoebe hollered out Mama as Hope was fixing to say her I do’s. Hope has already felt an instant connection to Phoebe and Phoebe really caught her off-guard. She will now be hesitant on what she wants to do.

Bold and the Beautiful Spoilers – Hope And Thomas Wed

Hope Logan Spencer will be hesitant at first but will end up marrying Thomas Forrester. However, their marriage may be over as fast as it started because some secrets are about to come out. Thomas thinks he has finally got what he has been wanting and that all his plans fell into place. He thinks it is smooth sailing now, but he will be in for a very rude awakening.

Hope will soon start seeing Thomas for the creep that he is. There is not many people that wanted Thomas and Hope together and they will continue working to get them apart. Who do you B&B fans think will end up exposing Thomas for the scum that he is?

Other “Bold and the Beautiful” spoilers suggest that Liam Spencer (Scott Clifton) becomes alarmed after overhearing a private conversation between Thomas Forrester and Flo Fulton (Katrina Bowden). After the wedding, Liam will go downstairs and will hear Flo and Thomas verbally sparing. He will hear Thomas mention a secret that Flo has to take to her grave with her and will realize it has something to do with Hope Logan Spencer. That will get Liam rilled up and he will decide to start digging into Flo’s past to learn more about her and try to figure out what they are hiding.

All he knows is that Flo is supposedly Phoebe’s birth mother and will want to learn more. Liam is very protective of Hope and does not want to see her get hurt and knows if the secret that they are referring to has anything to do with baby Phoebe that Steffy Forrester Spencer (Jacqueline Wood) could get hurt as well. Liam plans to get to the bottom of things. Do you B&B fans think that will happen? Make sure to stay tuned to CBS “The Bold and the Beautiful” to find out.