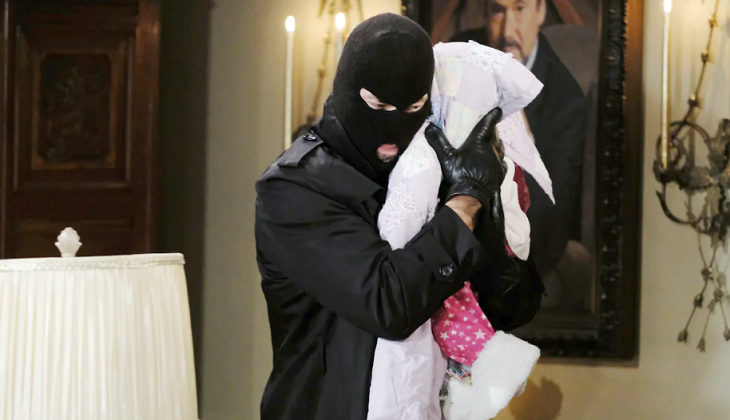 Days of Our Lives spoilers tease that Xander Cook Kiriakis (Paul Telfer) could be the mysterious figure dressed in black who will kidnap little Holly Jonas (Harlow and Scarlett Mallory) from her bed this week on Days of Our Lives!

Viewers know that both Xander and Kristen DiMera (Stacy Haiduk) are coming back to Salem. Their air-dates have not yet been announced. So, it makes sense to think it could be Xander.

Days Of Our Live Spoilers – Characters Returning From The Dead

The last time he showed up in Salem he brought another person back with him who had also been returned from the dead; Jack Deveraux (Matthew Ashford). Nicole Walker (Arianne Zucker), who was also in the fiery warehouse with Xander and Kristen, has also just returned.

Xander was also involved with the original storyline when Chloe Lane (Nadia Bjorlin) killed El Fideo (Andoni Gracia) which caused the recent cartel problems for Chloe. Xander took some diamonds that he wasn’t supposed to have that belonged to the cartel also.

At the time, Xander set up Theresa Donovan (Jen Lilley) for robbing the safe. So that links Xander, the cartel, and Chloe. Being in the warehouse that supposedly burned to the ground links Xander and Nicole. It also links Kristen, who also supposedly died there.

Days Of Our Live Spoilers – Cartel Involved In The Kidnapping?

The reason for Holly’s kidnapping could still have something to do with the cartel and Xander could easily be involved; Xander could also easily be the mysterious person on the other end of the line when Ted Laurent (Gilles Marini) was overheard talking about Chloe.

Days Of Our Lives Spoilers: Abe And Sheila Test The Waters – Just In Time For Valerie’s Return https://t.co/copcyv2r8k pic.twitter.com/6faM37INaN

The appearance of Ted Laurent, the killing of El Fideo by Chloe defending John Black (Drake Hogestyn) and Paul Narita (Christopher Sean), and the appearance of Leo Starke (Greg Rikaart) and his suing Sonny Kiriakis (Freddie Smith) for sexual harassment at Titan, and later blackmailing him, all seemed to happen within time frames close to each other.

Just exactly what might the kidnapper have up his (or her) sleeve? And are Xander and Ted Laurent a part of it? Stay tuned to Days of Our Lives and keep checking Days of Our Lives spoilers frequently for all the latest news, updates, and developments!