‘Bold And The Beautiful’ Spoilers: Zoe Forms An Unlikely Alliance With Shauna And Flo

Bold and the Beautiful spoilers tease that Zoe Buckingham (Kiara Barnes) will get an unlikely ally. Zoe has been trying desperately to keep a lid on Florence “Flo” Fulton (Katrina Bowden). Flo has a guilty conscience about her part in Reese Buckingham’s (Wayne Brady) baby switch and adoption scam, and she’s been on the verge of telling Hope Spencer (Annika Noelle) the truth for weeks now.

Flo feels terrible that Hope believes her daughter died, and she knows the longer Steffy Forrester (Jacqueline MacInnes Wood) bonds with the baby, the more difficult it will be for everyone when the truth comes out.

It has been a living hell for Flo, and it’s gotten worse since she found out that she’s a Logan. Now that she knows she and Hope are cousins, the truth is nearly unbearable for her. 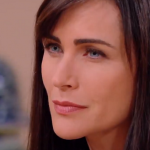 Bold And The Beautiful Spoilers: Quinn Continues To Undermine Sally

But now Flo’s mom Shauna Fulton (Denise Richards) is in the picture, and she’s also encouraging Flo to keep quiet about the baby situation. But B&B spoilers say that things will come to a head after Zoe learns from Brooke Forrester (Katherine Kelly Lang) that Flo is a Logan. The news will totally take Zoe off guard, and she’ll immediately panic and see the writing on the wall.

Of course, Zoe will fear that Flo – as a Logan – will be even more likely to tell Hope the truth about the baby swap and adoption scam. The Bold and the Beautiful spoilers say that Zoe will pay Flo a visit at her apartment, and the results will be explosive. Zoe and Flo will argue, and the whole thing will get physical.

Ultimately, Flo will wind up on the floor, and Shauna will intervene with a gun. She’ll break up the fight, and from there B&B spoilers say that the three women will calm down and reach an agreement together. They’ll form a pact, agreeing to keep the baby secret between the three of them forever, no matter what.

Bold And The Beautiful Spoilers – Flo Fulton The Weakest Link

Apparently, the women will realize that they have way more to lose if the secret comes out than if they confess and spill the truth. Of course, Flo and Reese could easily go to prison for their crimes, and both Shauna and Zoe could get jammed up for obstruction of justice. It looks like they’ll all agree that they need to keep quiet for everyone’s sake.

Of course, Flo probably won’t be happy about keeping the secret, and going forward, she’ll remain the weakest link in the secret pact. She’s still going to feel guilty, especially when she’s around Hope. How long do you think Flo will be able to keep the secret?

‘Bold And The Beautiful’ Spoilers: Greedy Shauna Pushes Flo To Get Her Hands On Logan Money Before Baby Swap Comes Out https://t.co/vSY89lOTRG pic.twitter.com/jJ6cegnZGR

Coronation Street Spoilers: Peter On The Verge Of A Breakdown As He Desperately Searches For Carla