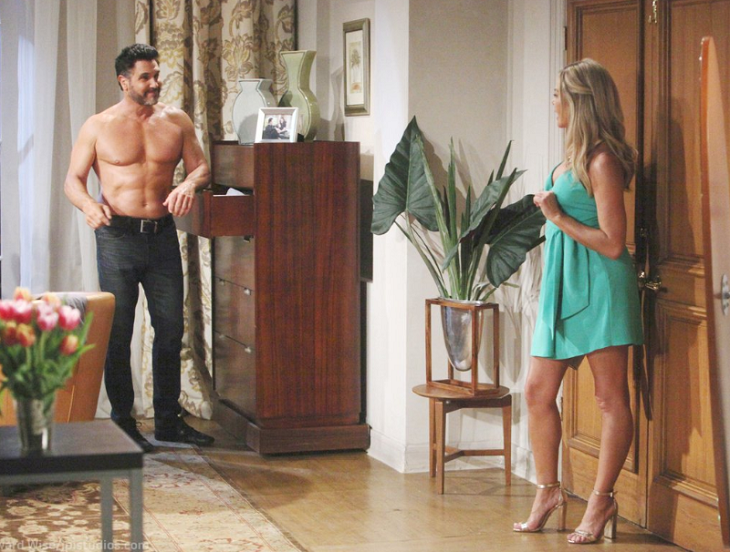 Katie Logan (Heather Tom) is being very cautious on ‘The Bold and the Beautiful’. She loves Bill Spencer (Don Diamont) and knows that he loves their son, Will Spencer (Finnegan George). But a plan involving Shauna Fulton (Denise Richards) involves a hard test of trust.

Turning the tables on a shrewd guy like Bill isn’t easy. But no one knows Diamont’s daytime character better than Katie. So she’s working off years of earned experience.

It wasn’t that Katie fully rejected Bill’s request that they marry, in what would be a third instance. No, she pushed his offer aside while citing various reasons why Batie Part III might not be right. The most important element being that Will could have his heart crushed again.

In a surely soapy scene, Shauna willingly accepted Katie’s offer to make a romantic push for Bill in his home. That fits with Miss Fulton’s desire to fit into her new life. B&B fans took note that the plot was advanced rather quickly, as the presumed Dollar Bill just happened to be home and alone on the night Katie first asked Shauna to help.

Digitally skipping to the Spencer estate setting, Shauna arrives in attire worn to catch Bill’s eye. She made small talk, fully complimenting Bill in order to trigger a response. Then, a purposeful splash of wine on his shirt sent Bill to the bedroom to change.

Katie managed to get into the house just as Shauna was calling, with, of course, Bill not realizing what was happening. Then, Shauna left her phone on speaker while Katie listened.

Bold And The Beautiful Spoilers – Big Mistake By Katie Logan?

As Brooke Logan-Forrester (Katherine Kelly Lang) advised, Katie seems to have trust issues and probably shouldn’t be testing Bill in this manner. Katie wouldn’t listen to her big sister’s advice, or repeated pleas to drop the scheme and simply go for a long engagement.

This feels as though Bill will pass the test and maybe even surprise Katie in another way. He has truly changed, so instead of becoming angry at what his hoped-for wife did, Bill could be grateful.

Bold And The Beautiful Recap & Spoilers Wednesday, May 15: Brooke Thinks Katie’s Plan Will Be A Disaster – Shauna Tries To Seduce Bill https://t.co/nMbmUHKmE5 pic.twitter.com/ZkAEoyU1IG

Katie only put this plan into motion in hopes of proving that Bill wants a lasting life with her and Will. A successful outcome could even have Bill admitting that Katie was thinking like him, a point Brooke also made earlier.