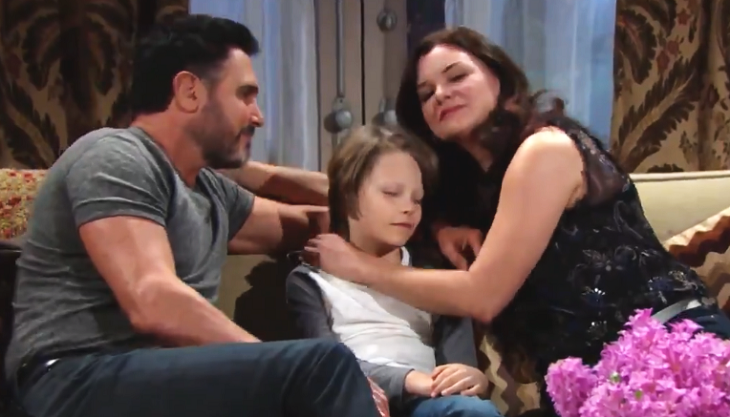 The Bold and the Beautiful spoilers tease that Katie Logan (Heather Tom) and Bill Spencer (Don Diamont) will soon have some big news to share.

They’ve been dancing around the idea of getting back together for a while now, but Katie and Bill have really been the last ones to realize just how much they belong together.

There’s one person who has long seen the attraction between Katie and Bill, and that’s their young son, Will Spencer (Finnegan George). As B&B viewers know, Will was responsible for several “accidental” meetups between Bill and Katie over the past few weeks, and he set up some romantic scenarios for his parents. Clearly, he’s been hoping that his parents will find their way back to each other.

But it won’t be Will who ultimately gets Bill and Katie back together. In fact, Will doesn’t even know that Bill recently proposed to Katie. As B&B viewers know, Katie declined the proposal, but later changed her mind after discussing the matter with Brooke Forrester (Katherine Kelly Lang) and Donna Logan (Jennifer Gareis).

But when Katie tracked down Bill to tell him yes, she discovered that he was drowning his sorrows in scotch with his old flame Shauna Fulton (Denise Richards). That gave Katie pause, and according to B&B spoilers, she’ll enlist Shauna’s help to test Bill’s loyalty before she formally accepts his proposal of marriage.

Since Bill has cheated before, Katie really feels like she needs to know whether he’s changed as he claims. The Bold and the Beautiful spoilers say that Shauna will agree to try to seduce Bill, to see if he gives in or if he’s truly loyal to Katie.

Bold And The Beautiful Spoilers – Will Spencer Is Thrilled

Fortunately for everyone, Bill will totally shut down Shauna’s seduction attempt, and Kate will be thrilled. She’ll ultimately accept Bill’s proposal, and the two will be engaged to be married. Then there will be just one thing left to do…tell Will the great news.

Will is going to be over-the-top happy to learn that his parents are getting back together and that his family will be reunited. Of course, there will be a lot of logistics to work out, as Katie and Will are probably going to be moving back into Bill’s estate, but those are just small details. The important thing for everyone is that their family will be back together.

RT if you have the same reaction to Katie’s plan. #BoldandBeautiful pic.twitter.com/aeWIkhuWXf

Are you looking forward to seeing Bill, Katie, and Will back together as a cohesive family?

The Bold And The Beautiful Spoilers: Steffy Took Advantage Of Liam? Hope’s Romantic…