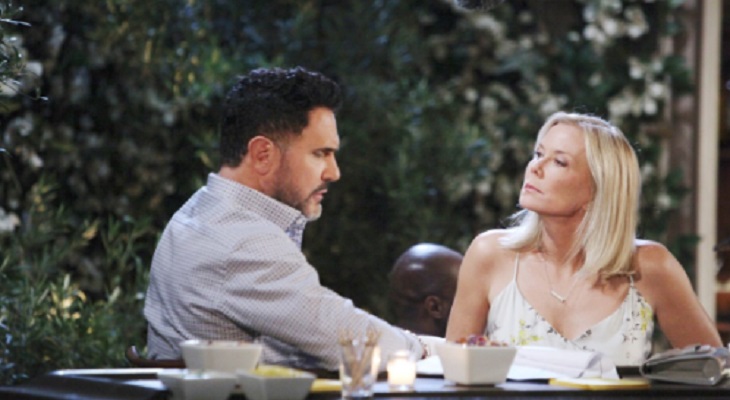 The Bold and the Beautiful spoilers tease that Bill Spencer (Don Diamont) needs to think, rather than just act as he often has in the past. Yes, his conversation with Brooke Logan Forrester (Katherine Kelly Lang) has nothing to do with this pairing getting back together. But viewers remember what happened the last time Katie Logan (Heather Tom) read too deeply into a conversation Bill had with another woman.

Shauna Fulton (Denise Richards) had just become an extended family member, in that her daughter Flo Fulton (Katrina Bowden) learned that she was genetically, a Logan, via Storm Logan (William deVry). However, Katie didn’t expect to see Shauna and Bill speaking intimately at Il Giordino.

Bill wasn’t romantically interested in Shauna, though he had a brief cavort with her in the distant past. With Las Vegas, Nevada, on Katie’s mind, she took an unconventionally bold approach and it paid off beautifully. Since the show’s title is worked into dialogue now and then, so too is it within these articles from time to time, like now.

Bold And The Beautiful Spoilers – Bill Rejected Shauna For Katie

In a very moving sequence of scenes, Bill rejected Shauna’s requested play for him. Katie was listening through her cell phone when Bill told Shauna that he loved Katie and only wanted to be with her. That stellar sequence proved to be the culmination of Bill’s attempts to reclaim Batie, which then happened.

Brooke is happily married to Ridge Forrester (Thorsten Kaye), as Katie knows. But Bill’s interest in her sister has dashed Batie before. So any link he has with Brooke must be approached cautiously.

After all that B&B has done to restore Bill, Batie fans are likely holding their breath in hopes that the writing staff doesn’t create a road block. Shauna proved to be a speed bump on the way to reconciliation. But the potential for tension between Brooke and Ridge to escalate, due Thomas Forrester’s (Matthew Atkinson) obsession with Hope Logan (Annika Noelle), is real.

Bold And The Beautiful Spoilers – Ridge And Brooke At Odds

It’s not unreasonable for Brooke to seek Bill’s input on this issue, as Ridge isn’t objective where his unstable son is concerned. It also wouldn’t be illegitimate to think that Katie would be really rattled if she suspects that Brooke is interested in Bill, vice versa, or both.

Surrounded by suspicion, Thomas is totally off the rails. Make sure to tune into #BoldandBeautiful this week! pic.twitter.com/qQqgy6w0Hq

It would seem that B&B will keep Bill, Katie, and Will Spencer (Finnegan George) together as a family. But Bill has to regain a bit of his edge, or he wouldn’t be Dollar Bill.

So maybe an overture comes from Brooke towards him, rather than the reverse? How Bill handles it would answer the question and possibly shift Katie’s backlash to her sister.