The Bold and the Beautiful rumors indicate that Thomas Forrester (Matthew Atkinson) will learn the truth about the baby switch.

After the death of Caroline Spencer (Linsey Godfrey), Thomas returns to Los Angeles with his son Douglas (Henry Joseph Samiri). The two have the support of their family during their time of grief, but it’s Hope Spencer’s (Annika Noelle) presence that makes the biggest impact.

Hope spends time with Douglas and the two quickly form a bond, much to Thomas’ delight. His son needs a mother figure and Hope is the person for that role. As she spends more time with Thomas and Douglas, romance will blossom between Hope and Thomas.

We’re celebrating 32 years of #BoldandBeautiful with the Spencers! Check out a special chat with @don_diamont, @CliftonsNotes, and @THEEdarinbrooks premiering TOMORROW on the B&B Facebook page. Tune in for fun games, fan questions and a toast to our 32nd anniversary! 🍻 pic.twitter.com/qnqqv9V5rl

Bold And The Beautiful Spoilers – Blossoming Romance Could End Quickly

But their blossoming romance could be over just as quickly as it begins if Thomas learns the truth about the baby switch. 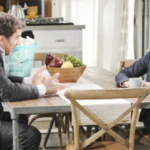 So far Zoe Buckingham (Kiara Barnes) and Flo Fulton (Katrina Bowden) are the only ones who know about Dr. Reese Buckingham (Wayne Brady) switching Hope’s healthy infant with a stillborn baby.  But it’s only a matter of time before someone close to the Forrester family learns the truth, and that person could be Thomas.

If Thomas discovers the truth, he’s going to be stuck in a tough situation. On the one hand, he knows how much his sister Steffy Forrester (Jacqueline MacInnes Wood) has grown close to baby Phoebe and it’ll break her heart having to give her back.

Bold And The Beautiful Spoilers – Hope Spencer Is Still Devastated

But at the same time, Thomas knows how devastated Hope is over the loss of her child and he doesn’t want her to suffer. However, he also knows that if he tells Hope that Beth is alive, then it will mean Hope and Liam Spencer (Scott Clifton) will get back together.

Hey #BoldandBeautiful fans
Showrunner Brad Bell teases a new hot social issue is coming in 2019. Any idea what it could be? Get the juicy details here ====>https://t.co/PEKUgvSh0c

Thomas has grown close to Hope and feels there’s something special with them. He doesn’t want their relationship to end, but it could once the baby switch is revealed. Beth is the only thing that will keep Hope and Liam together. And once the truth comes out the couple will reunite, and Thomas will be left alone.

Do you think Thomas will learn the truth about the baby switch? If so, will he keep it a secret or spill the beans?