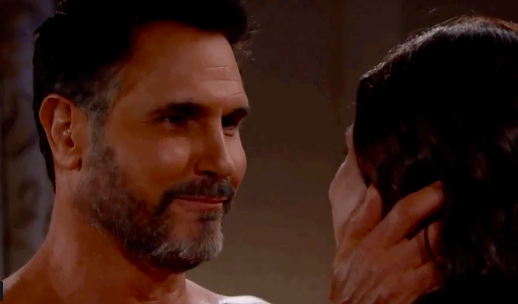 Katie Logan (Heather Tom) intends to adjust her last name again on ‘The Bold and the Beautiful’. Confirming that Bill Spencer (Don Diamont) has, in fact, changed, she’s committed to reviving the ‘Batie’ nickname through soapy nuptials. But will her reconciliation with Bill last?

B&B Spoilers: Speculation Remains On If Bill Spencer Has Changed

Justin Barber (Aaron Spears) knows Bill as well as anyone. Beyond being Spencer Publications top attorney, he’s more importantly Bill’s best friend. Justin has been a fully positive influence in encouraging the evolution of the man he recently referred to as ‘Dollar Dad’. Those efforts seem to have paid off in something that’s far more important than money.

While Steffy Forrester (Jacqueline MacInnes Wood) is about to return from Paris France, with Bill’s biological granddaughter’s (Kelly Spencer, Zoe Pennington and Chloe Teperman and Phoebe Forrester, Isabella de Armas and Rosalind Aune), though only Kelly is believed to be blood, she hasn’t been on Bill’s love radar for quite awhile. He also hasn’t had eyes for other women, as B&B viewers have now confirmed themselves.

Bold And The Beautiful Spoilers:  Will Spencer Is Katie Logan’s Main Concern

Will Spencer (Finnegan George) was Katie’s number one concern, which is natural. All good parents, while not expected to be perfect, do place the well-being of their child, or children, above themselves. That’s what Katie was doing when she considered her son’s interest above her own guess that Bill may have changed, which is what she was hoping.

Katie didn’t want to risk another marriage ending in failure, as that would break Will’s heart. Her experiences simply couldn’t be overlooked.

Brooke Logan-Forrester (Katherine Kelly Lang) didn’t like her sister’s plan to have Shauna Fulton (Denise Richards) play up to Bill at the Spencer mansion. But Katie felt she needed to know if he’d truly changed. Thankfully, to her surprise, he had.

A fair question exists with Katie now telling Bill that she’ll agree to his request to reunite their family. Will the engagement, with however long that period extends, or even the third realized marriage, last?

Fans of ‘The Bold and the Beautiful’ rightfully express their opinions on a regular basis. So, will Bill and Katie’s reconciliation last? Please vote in our poll below!

General Hospital Spoilers: Is It Ryan Chamberlain In Canada? How Did He Tie Up Laura and Curtis With One Hand?