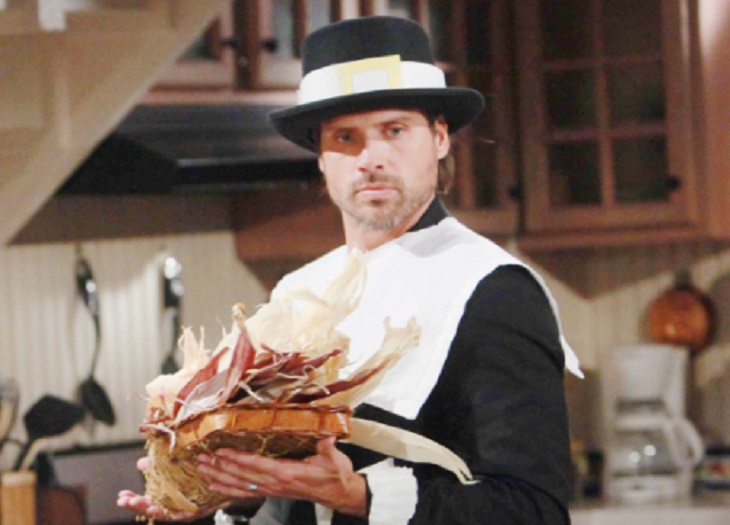 While times are rough for various personalities on Young and the Restless, there are still some Thanksgiving blessings that can be counted in Genoa City. Let’s focus on the positives as this annual holiday arrives.

Phyllis (Gina Tognoni) might be the most thankful person in all the land. Ashley (Eileen Davidson) deserves to be sitting in the Jabot Chief Executive Officer’s chair right now, not Phyllis. If Davidson hadn’t decided to voluntary leave that cast Ashley would be. But she didn’t and so Phyllis seized an opportunity and has begun to make the most of it.

Along with Phyllis on Young and the Restless, comes her renewed best friend, Lauren (Tracey Bregman). The head of Fenmore’s negotiated a sound investment a few years ago. Jack (Peter Bergman) agreed to buy a forty-nine percent stake in Lauren’s family company and now, the top decision-maker at this thriving retailer has now become Jabot’s Chief Operating Officer. Her expertise will benefit both brands exponentially moving forward.

Kerry (Alice Hunter) was enjoying a solid career before a number of GC business suitors contacted her. Ashley’s departure from Jabot created a need for a world-class chemist. Kerry not only fits the bill, but she’s also gained the interest of a very eligible bachelor. Jack’s a generation, or so, older than Kerry. But that’s never stopped him before. If all goes well ‘Jerry’ could become Y&R’s next cute couple.

Kyle (Michael Mealor) was entangled with quite the character. Yes, her name was Summer (Hunter King). But then the lovely Lola (Sasha Calle) came along. A breath of the sweetest air he’s ever inhaled, this younger Abbott man is floating on clouds nine, ten, eleven, and twelve. As long as Kyle can avoid further issues with his ex-girlfriend he should be able to create a wonderful life with Miss Rosales.

The cast and crew of The Young and The Restless would like to wish you a very #HappyThanksgiving! Each and every year we are grateful for the amazing #YR fans. Thank YOU!! ❤️ pic.twitter.com/7L4zoW5FB6

Nick (Joshua Morrow) switched romantic partners, again on Young and the Restless. While ‘Shick’ fell apart, again, the head of Dark Horse played off one of his best inner traits, resilience. Reaching back into the past this feature will end where it began, with Phyllis. Kudos to this daytime classic for having the guts to actually revive the once and still controversial pairing known as ‘Phick’.

This duo may, or may not survive longterm. But early returns are intriguing and that surprise has earned soapy praise from all light-hearted fans who recognize that yes, there are Thanksgiving blessings to be counted in GC.