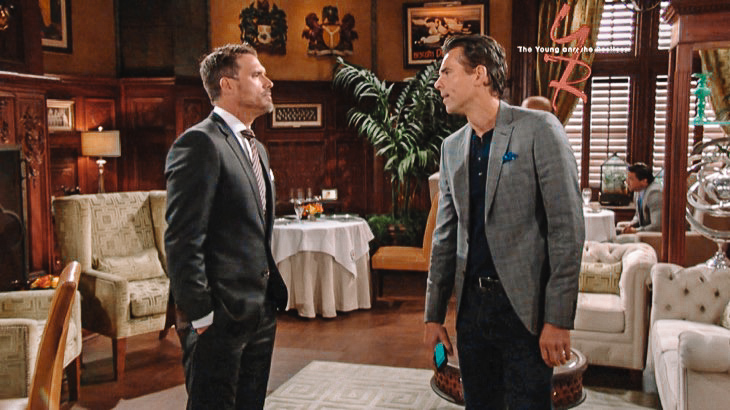 “The Young and the Restless” spoilers for Friday, November 23, tease that several Thanksgiving celebrations will get underway. Naturally, there’ll be some family conflict during these gatherings. It just wouldn’t be a holiday in Genoa City without some clashing!

Over with the Abbotts, Jack’s (Peter Bergman) still hopeful that Ashley (Eileen Davidson) will show. He makes sure there’s a place for her at the table, but Billy (Jason Thompson) doesn’t think their sister’s coming. Abby (Melissa Ordway) eventually scampers off with Arturo (Jason Canela), who’s being pressured to attend the Rosales family get-together. He’s only willing to come if Abby’s his plus one.

Lola (Sasha Calle) and Mia (Noemi Gonzalez) argue a bit, but they manage to tone it down eventually. Meanwhile, Rey (Jordi Vilasuso) grills Nikki (Melody Thomas Scott) about Victor (Eric Braeden). He’s suspicious when he learns Victor couldn’t make it home for Thanksgiving after all.

Rey ends up back at his place, where things get heated. He’s not happy to find out Mia paid Arturo a visit at Dark Horse. Lola ultimately gathers up the gang and forces them downstairs with Thanksgiving dishes. They surprise Sharon (Sharon Case) by pitching in on her efforts to serve the homeless.

As Sharon talks to Rey, Mia glares with envy nearby. She later brings up Sharon and Rey’s bond with her hubby, but he gripes about Arturo. Mia feels like Rey needs to give her a reason she should avoid him. Elsewhere, Faith (Alyvia Alyn Lind) appears blue about Phyllis’ (Gina Tognoni) move-in but assures Nick (Joshua Morrow) that she doesn’t mind.

Nick ends up at the Newman gathering with his daughter, but Billy’s arrival brings hostility. They spar about Sharon and Phyllis, but Billy insists his ex is behind him. As for Victoria and Nikki, they talk privately about handling Tessa (Cait Fairbanks). Victoria suggests that even without evidence, Tessa’s still a threat they need to get a grip on.

At Crimson Lights, Tessa’s impressed by Sharon’s homeless mission and generosity. She’s grateful for so much and tries to share some loving moments with Mariah (Camryn Grimes). Sharon speaks with Mariah alone soon after. It’s clear that Mariah’s having a hard time with this, but Sharon offers some guidance before shooting Victoria a text. She lets her know Tessa went home alone.

Once Tessa arrives back at her studio, she’s stunned to find Victoria waiting. Victoria insists that Tessa needs to sit down. She’s going to talk and Tessa’s going to listen! Back with the Abbotts, Jack learns Ashley isn’t returning. She texts him a press release about her new spring line, which upsets Kyle (Michael Mealor). He doesn’t think Jabot’s line will be ready in time, but Kerry (Alice Hunter) has faith.

Jack urges Kerry to share some wine with him while Kyle reaches out to Lola. When Lola learns Kyle wants to have a weekend getaway at the cabin, she rejects the invitation. “The Young and the Restless” spoilers say these two will have some issues to sort out next week, so we’ll give you updates as other Y&R news comes in. Stay tuned to see what’s next on the CBS soap.

General Hospital Spoilers: Ryan Targets Jordan As Next Victim By Throwing Her Off His Trail