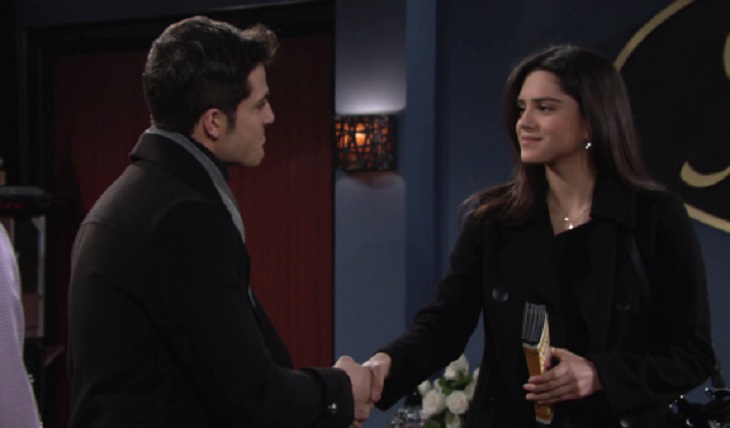 Fans of ‘The Young and the Restless’ see a potential plot path. Kyle (Michael Mealor) does something, anything, that Lola (Sasha Calle) sees as a betrayal. She then turns to Fen (Zach Tinker), who will be happy to sing love songs to her.

Lola recently told Kyle that she’s living by responsible values to-date. Abby (Melissa Ordway) offered respect for that choice, provided support, and encouraged her to not give up Mealor’s character.

Kyle has quickly come to care for Miss Rosales. She instantly projected as the anti-Summer (Hunter King). Now, with his last girlfriend gone, Lola also appeared to telegraph into a longterm girlfriend, fiance, potential wife, and mother of his first child, unless ‘Kola’ initially had twins, or more!

Young And The Restless Spoilers – Fen Enchanted By Lola

However, the recast of Fen was handled skillfully. From the jump, Tinker’s edition was enchanted by Lola. After attempting to make inroads at Jabot, he later saw her at Crimson Lights. Fen didn’t know that Kyle was her beau, which ‘Kola’ found rather amusing, as did Mariah (Camryn Grimes).

While Fen was shut down on his first day, he’s expressed open interest in being part of the Genoa City dating scene. Re-imagining himself as a singer, instead of a mini-me lawyer, chip off his dad’s (Michael, Christian LeBlanc) block, Fen has evolved, in his mind, into being a world-class entertainer.

Lola is a very down-to-earth person. Her connect with Kyle does pair two somewhat similar personality types, as Lola exhibits a strong belief in herself in a different way then her still-new boyfriend. That seemed to make Kyle the right guy for her. However, Fen’s interest is known and he could serve as an alternative, or possibly, her next go-to guy.

Young And The Restless Spoilers – Will Fen Steal Kyle’s GF?

Kyle’s personal history and Jackesque (Peter Bergman) bachelor bravado easily winks as the potential for him to let Lola down at some point. Considering the newness of their relationship and Fen’s personal and professional goals, Mr. Baldwin will surely remain ready to intervene and maybe, win Lola over.

General Hospital Spoilers: Ryan Slips Up; Sam Has A Secret