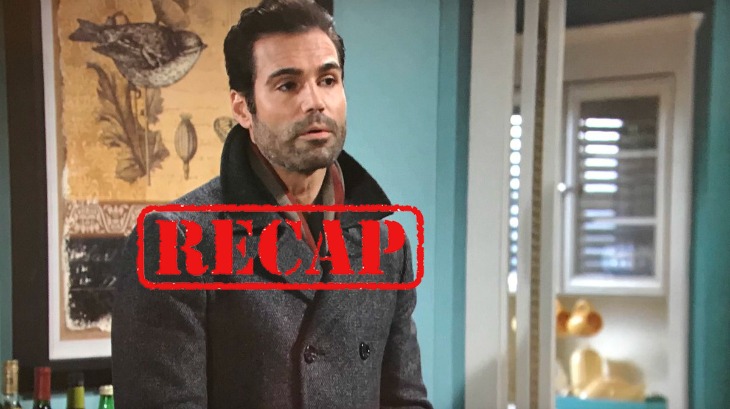 “The Young and the Restless” (YR) recap for Tuesday, December 4, 2018, reveals that over in their car, Nikki Newman (Melody Thomas Scott) and Victoria Newman (Amelia Heinle) watch as the stables burn and worry about the horses. Rey Rosales (Jordi Vilasuso) jumps into the backseat and assures them the animals are fine. He then orders them off the ranch property. Security phoned in an intruder earlier and the police are investigating.

At Devon Hamilton’s (Bryton James) penthouse he snarks to Ana (Loren Lott) about Cane Ashby (Daniel Goddard) making sure Shauna Nelson (Camryn Hamm) go away. Ana offers to be there for him and talk, but Devon’s going out and will not be back home tonight.

The Young and The Restless – Tessa Finds Mariah Gone

In their studio apartment, Tessa Porter (Cait Fairbanks) and Mariah Copeland (Camryn Grimes) read in bed. Mariah puts her book down and turns her back to Tessa, who hasn’t been unable to engage Mariah in conversation, turns off the light and faces the opposite direction. Mariah looks miserable. In the morning, Tessa finds Mariah’s gone.

At Victoria Newman’s house, she and Nikki Newman couldn’t sleep for worrying about the fire and Rey Rosales’ investigation. Nikki reveals she’s been unable to reach Victor Newman (Eric Braeden) and says he’s disappeared! Victoria calls the station and learns Rey Rosales is still at the ranch. Nikki’s frantic. The doorbell rings and it’s Nick Newman (Joshua Morrow), who reports the fire is out and the stables are gone.

Nikki hopes it was just faulty wiring. Nick wonders if something’s going on. Nikki goes to get some rest after Victoria worries about her stress. Nick complains about Victor’s absence before talk turns to Reed Hellstrom (Tristan Lake Leabu), Nick’s kids, and finally Phyllis Summers (Gina Tognoni). Victoria thought Phyllis would go back to Billy Abbott (Jason Thompson). Nick thought so too, but she’s assured him that it will not happen. He clarifies there’s no future for him and Sharon McAvoy (Sharon Case) either. Nikki reappears and cries that her emails to Victor are bouncing back, and his number is out-of-service!

Y&R Devon Gets Home With A Fever

Back over at Devon Hamilton’s penthouse, he arrives home where Nate Hastings (Brooks Darnell) spots him in the corridor and asks, “Rough night?” He helps him inside and warns Ana that her brother’s sporting a hangover. Devon agrees to submit to Nate’s hangover cure. Nate and Ana chop vegetables noisily and run the blender as Devon cringes. Nate presents the concoction and Devon downs it. Nate warns Devon what he’s doing to his body before leaving.

Ana wants to help Devon fix his heart. She hasn’t suffered his type of loss, but fell in love with singing, and had to let go of her dream. Ana lost the passion that drove her, just as he lived for Hilary Curtis (Mishael Morgan). Devon feels it’s not the same and says that she can do music again but he’ll never get his wife and child back. Ana says he can learn how to cope. Devon laments that it’s been months and he still hasn’t absorbed that Hilary’s not coming back. Ana suggests professional help. Devon agrees to try it.

The Young and The Restless Fen Flirts With Lola

At Jabot, Fenmore Baldwin (Zach Tinder) introduces himself to Ted in reception and learns Lauren Fenmore Baldwin (Tracey E. Bregman) is out. Lola Rosales (Sasha Calle) appears with new takeout menus, and meets Fenmore, who flirts, and asks if the feature is ‘hot’. Lola exits, and Ted explains she has a boyfriend.

Mariah Goes To Kyle For Help

At Crimson Lights, Mariah Copeland wants Kyle Abbott’s (Michael Mealor) help regarding Tessa Porter. Kyle recaps that Tessa did something so bad Mariah doesn’t know if she can trust her again. Mariah adds most people would be done after the lies, but she keeps going back for more pain and disappointment. Kyle thinks it’s love. Mariah goes on about her reasons for going back and Kyle can’t get a word in. Finally, she thanks him.

Fenmore Baldwin appears. He asks Kyle if Summer Newman (Hunter King) is still in town, they could get the old gang together. Kyle explains she’s overseas. Fenmore’s keen to check out the Genoa City dating scene. Mariah snarks that she’ll put out the word. Fen updates them on his switch from law to music and says he needs to get a demo to Devon Hamilton and wonders if Mariah could help.

She agrees to listen to his demo. The conversation switches back to dating and Fenmore reveals he just likes a good time and has his eye on someone. He spots Lola Rosales and brings her over. Lola kisses Kyle hello. After, Fen muses he’ll sit back and wait for Kyle to screw up like he always has. Kyle counters, “Not this time.” Meanwhile, Lola checks in with Rey Rosales, who gets a call, mention catching a break, and leaves.

Tessa Porter arrives, looking to have coffee with Mariah, who rushes off to work. Later, Fen apologizes for trying to move in on Lola. Kyle snaps, “Never stopped you before.” They bicker back and forth until Kyle leaves with Lola.

When someone tries to talk to you before you’ve had your first cup of coffee. ☕️ #YR pic.twitter.com/ZinQnyjhRG

Back at Victoria Newman’s place, Nick Newman disconnects from a call about Victor Newman’s closed account when Rey Rosales arrives to announce the fire was deliberately set. He asks about Victor. Nick relays they’re trying to get in touch with him. After Rey leaves, Nick asks if they get the feeling he knows more than he’s saying. Victoria adds, “It’s more than a feeling.”

General Hospital Spoilers & Recap December 4: Ryan Give Himself And Ava An Alibi