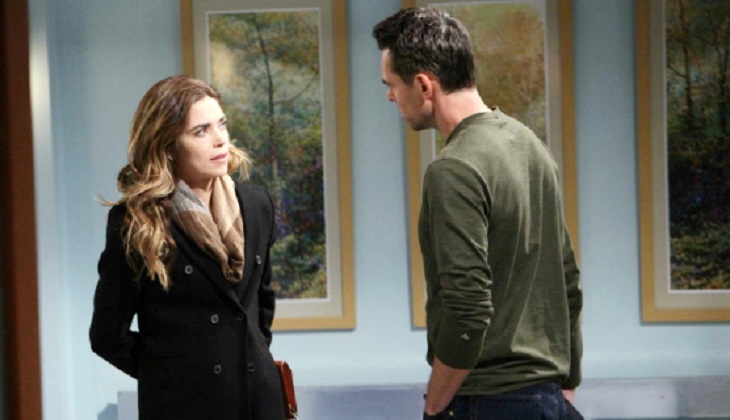 While they’ve been involved with many people through the years on ‘The Young and the Restless’, Billy (Jason Thompson) and Vickie (Amelia Heinle) remained tied by their children and by the most powerful of all real life and soapy forces, love. The length of the last sentence rivals Villy’s historical depth and winks at the potential for this couple’s revival.

Most importantly, Vickie and Billy aren’t currently attached. Hardly lonely harts, either person could get a date just like that. But being that it’s Christmas, old feelings are roasting in the fireplace just below Johnny (Ryan and Holden Hare) and Katie’s (Sienna Mercuri) stockings.

At almost any moment the J.T. (Thad Luckinbill) case could be busted wide open. Considering the departure of executive producer and head writer Mal Young, the end of this particular storyline will have to be created, or already has been.

Victoria’s need for assistance, in particular, will naturally incline Billy to rush to her defense. It’s more than possible that Rey (Jordi Vilasuso) will attempt to, or actually will arrest Vickie, along with Nikki (Melody Thomas Scott), whenever she’s out of her coma, Phyllis (Gina Tognoni), and Sharon (Sharon Case).

Someone will need to be with the kids then, as Reed (Tristan Lake Leabu) likely will have his own legal problems for hitting-and-running over his grandmother on Christmas. That act alone would deeply ingratiate Billy into Vickie’s good graces.

Young And Restless Spoilers – Billy Better With Phyllis or Victoria?

‘Philly’ fans and ‘Villy’ detractors, along with those who land in the center of the Venn diagram, might grudgingly admit that Vickie and Billy had what Phyllis and Billy never did, realized commitment. Y&R debuted fifty years after John Venn died, so he never had a change to weigh in on the similarities and differences between these couples. However, any fan could use his diagram to demonstrate that ‘Villy’ was married multiple times and share children. ‘Philly’ never intersected at those plot points.

Those differences not only set ‘Villy’ apart from ‘Philly’, they also can be used as evidence of some patterns can be repeated. While not certain, Vickie and Billy are more inclined to reunite than had been true in the recent past.

Young And The Restless News: Kristoff St. John Speaks Out About Y&R Return, Change Of Writers