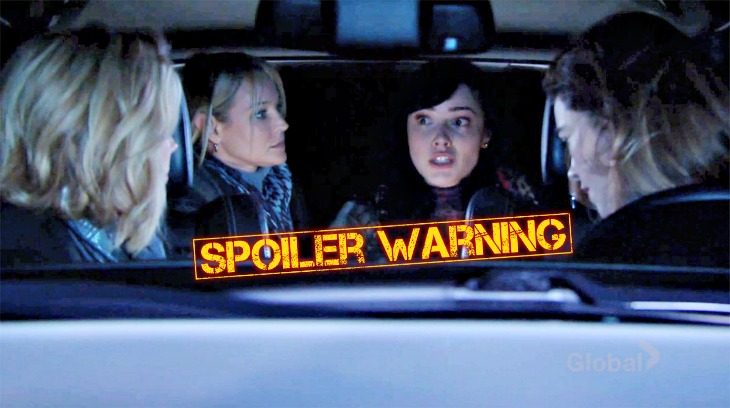 “Young and the Restless” spoilers for Monday, December 10, tease that Tessa (Cait Fairbanks) will face an incredibly traumatic ordeal. In a car, Tessa still has a black bag over her head as she panics. She assumes the thugs are back, so she insists she paid them and that was supposed to be the end of it. Tessa mentions keeping Crystal (Morgan Obenreder) safe before the bag is ultimately removed.

Sharon (Sharon Case), Victoria (Amelia Heinle) and Nikki (Melody Thomas Scott) stare Tessa down. They intend to get some answers about the planted evidence. Sharon doesn’t say much, but Nikki and Victoria are vicious. They accuse Tessa of framing Victor (Eric Braeden), but she assures them she doesn’t have a death wish. Tessa cries hysterically as they keep pushing and pushing.

Sharon tries to get Victoria and Nikki to back off, but they continue the grilling session. Once they’re satisfied, Tessa is untied and left out in the cold. They throw her phone out of the car before driving off and ditching Tessa in the woods.

At Crimson Lights, Mariah (Camryn Grimes) greets Lola and they chat about relationships. Mariah confesses she’s going to dump Tessa but mentions she’s the only person that ever truly touched her soul. Once Lola’s gone, Mariah gets a phone call. It’s Tessa and she’s bawling out in the middle of nowhere. Mariah tracks her phone to find her and embraces her on the ground.

Tessa’s past catches up with her today on #YR. pic.twitter.com/HiKDtRgKwf

Soon after, Mariah’s trying to get some answers in the car. Tessa can barely breathe as she talks about this being her fault. She eventually reveals that Victoria and Nikki came after her, but doesn’t include Sharon. Mariah shuts down the idea that Tessa is evil and admits she wanted to break up, but not anymore. She can see that she needs Tessa now, so she plants a kiss and holds her close.

Nick did say he would do anything for Phyllis! 🤷‍♂️ #YR pic.twitter.com/qlTSDdGnbE

Over with Phyllis (Gina Tognoni), she calls off the plan and saves Nick (Joshua Morrow) from the drama in Rebekah’s suite. Rebekah’s irked about getting duped but makes the deal anyway. Across town, Billy (Jason Thompson) tells Jack (Peter Bergman) about possibly reuniting with Phyllis. Jack doesn’t seem to think it’ll be that easy and it turns out he’s right.

Young and Restless Spoilers: Nikki Newman’s Past Haunts Her

Phyllis lies to Nick so she can meet with Billy later. However, she’s not on board with the reunion he wants. Phyllis contends that some wounds are too tough to get past and lets Billy know they’re really done. Back with Nikki, she tells Victoria she wants to sleep in her own bed and goes home. It isn’t long until Nikki finds J.T.’s (Thad Luckinbill) clothes in bed next to her – the same grimy ones he was buried in!

“The Young and the Restless” spoilers say some hot drama’s brewing on the CBS soap. We’ll give you updates as other Y&R news and rumors emerge. Stay tuned to see what’s next in Genoa City.