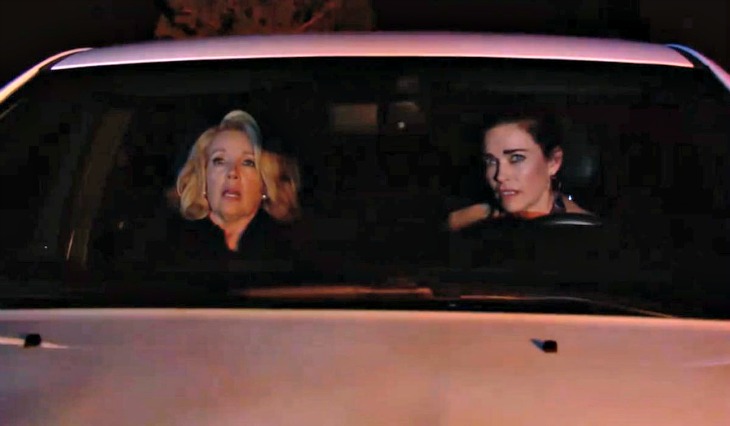 “Young and the Restless” spoilers for Monday, December 3, tease that Devon (Bryton James) will cling to what’s left of Hilary (Mishael Morgan). At the penthouse, Devon’s upset about Shauna (Camryn Hamm) leaving. She insists that it’ll be a good thing. Thanksgiving went well with her parents, so she’s ready to go live with them.

Cane (Daniel Goddard) pushes Devon to accept this, but he points out that he made a promise to Hilary (Mishael Morgan). He feels like Devon wants to erase all memories of Hilary and rip what’s left of his family apart. Cane notes that Devon will have to start living for himself and not just for Hilary one day.

After Shauna and Charlie (Noah Alexander Gerry) settle on a long-distance romance, they bid each other farewell. Next, Shauna says goodbye to Devon. She’s thankful that Devon showed her love and opened his home to her. Devon assures Shauna that he’ll always be there if she ever needs anything. They lean in for a sweet hug before Shauna departs for Colorado.

Cane tells Devon: “I spoke to Shauna and she loves you and she’s grateful for everything you’ve done, but she doesn’t feel safe here, so she’s going to go back to Colorado and she’s going to live with her parents there.”#YR #YoungandtheRestless pic.twitter.com/HXZbbb6Zae

After Sharon walks over, Victoria and Phyllis encourage her to come up to Mia’s place with them. They think it’s best if they make nice since she’s Rey’s wife. J.T.’s (Thad Luckinbill) murder investigation hasn’t been put to rest, so anything they can do might help.

Mia drove Sharon right out of the party and back into Rey's orbit. HA!@Team_Shey #Shey #YR pic.twitter.com/R7URAa8arl

Rey wonders how the evening went, so Sharon admits friendship isn’t going to happen when it comes to Mia. She gets that he wants to repair his marriage, but he confesses that he hasn’t had a sexual reunion yet. Rey implies that it’s because he keeps picturing Sharon in his bed instead. He’s struggling to fight his feelings, so they nearly kiss. Mia arrives just in time to derail the lip lock.

Back with Nikki, she learns the stables on are on fire at the Newman ranch. Nikki fills Victoria in on this shocker and they’re both in shock. Fenmore “Fen” Baldwin (Zach Tinker) also makes his way back to Genoa City. He promptly drops a bomb on Lauren and Michael (Christian LeBlanc). It turns out Fen is walking away from law school to pursue a career in music, so his parents aren’t pleased.

Fen is bringing back a few surprises when he returns to Genoa City! 👏 @Traceybregman and @CJLeBlanc would like to introduce you to @ZachTinker who makes his #YR debut on Monday. Join them in welcoming him to the Y&R family! ❤️ pic.twitter.com/UDgmHHwc2p

Fenmore Returns and is Dropping Law To Pursue Music

Fen sticks to his guns and hopes Devon will put him on his music label. He also wants to stay at Lauren and Michael’s place so he can save some money. They want to revisit this discussion in the morning, but Fen promises he’s thought it over thoroughly and won’t have a change of heart.

“The Young and the Restless” spoilers say another great episode’s in store. We’ll give you updates as other Y&R news and rumors emerge. Stay tuned to see what’s next in Genoa City.