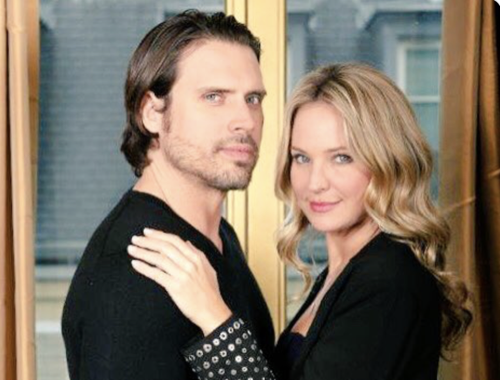 The Young and the Restless (Y&R) star Sharon Case, the lovely actress who plays Sharon Newman, talked to TV Insider about Mariah Copeland (Camryn Grimes) and Tessa Porter’s (Cait Fairbanks) relationship and why Nick Newman (Joshua Morrow) is Sharon’s soul mate. She gave a very revealing interview and she explained all the reasons why she will never support “Teriah.”

Sharon has serious issues with Mariah and Tessa’s relationship. She has seen what Tessa is at her core and she cannot look away anymore. She used the situation with JT Hellstrom’s (Thad Luckinbill) death and used it to profit for it. In Sharon’s mind, when push came to shove and Tessa saw she could benefit from JT’s death, she did it – even though it was at the expense of the people important to Mariah.

For Sharon, since Mariah came into her life later in life, she tends to be more protective of her. However, she is a protective mother with all her children. With Mariah, they are friends as well as mother and daughter. She wants to guide Mariah to have a healthy relationship and as much as she’d like it to be Tessa, Sharon will never support their coupling.

Why is it imperative that the writers, et al feel the need to ruin everything? Look how good they look together. #YR #Shick pic.twitter.com/svG750JSgm

Young and The Restless – Is Nick Her Soulmate?

Sharon and Nick have [almost] gotten married twice in the past few years. Both times it was stopped with some type of drama with Phyllis Abbott (Gina Tognoni). Right now, it doesn’t look like Sharon and Nick are ready to commit to each other again, but Case believes it will happen again.

Sharon explains the reason she believes that is because even though it didn’t work out between them, they wanted it to. They wanted it to be a forever thing, it just didn’t because of Phyllis and Nick’s hookup. She believes her alter ego will forgive her ex one day and they could have their happily ever after.

“Who knows,” Sharon Case said. “Maybe, Sharon and Nick will be the next Victor (Eric Braeden) and Nikki (Melody Thomas Scott) Newman on the show and get their happy ending.” Don’t forget to come back later for more The Young and the Restless (Y&R) spoilers, news, and casting updates!

New Soap Chronicles of the Sun To Debut On TV5Monde USA