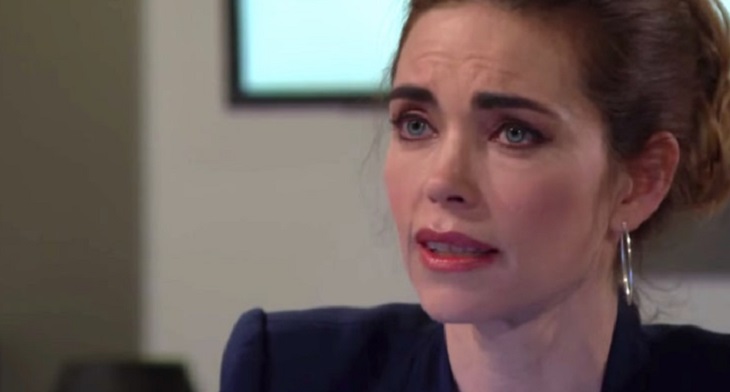 Vickie (Amelia Heinle) has had many major parts of life come easy to her on ‘The Young and the Restless’. But now two of those elements have been badly damaged.

Some people are born into wealth. Vickie was. Some people have a steady stream of romantic options flow toward them, where the best are picked and chosen. That’s been true for Vickie since she was a teenage girl.

Her recent relationship renewal with J.T. (Thad Luckinbill) hasn’t been smooth, but that’s not the issue now. The mere fact that her ex-husband would want to resume personal pursuits with her underscores the charismatic pull she continues to maintain.

But Luckinbill’s character will be furious as soon as he learns that Vickie used him and his position at Newman to retrieve the evidence she and Jack planted at Jabot. The already fragile ‘J.T.V.’ pairing could be over.

People like Queen Victoria generally don’t go bowling. But the seven-ten split she didn’t want to score, in knocking down her father and J.T. with the Ashley (Eileen Davidson) frame scheme, dashes assumed ascendancy plans at the family conglomerate.

The plan Vickie and Jack (Peter Bergman) concocted reflected insecurity and amateurishness. Why would either person believe that Victor (Eric Braeden) and Ashley would not be able to figure out what they did?

Now that all has been revealed and acknowledged, Vickie faces the very real possibility of being thrown out of Newman. As Y&R viewers saw, Victor told Ashley that he would take her request to fire Vickie under advisement.

Victor didn’t reject the condition of Ashley’s return out of hand. However, he could fire her as Chief Operating Officer and allow his daughter to stay on in a reduced capacity and under a different title.

Vickie has been used to plenty of money, which includes the five-hundred million dollars she was awarded, along with Nick (Joshua Morrow) and Abby (Melissa Ordway) in a lawsuit settlement with her father. She’s also used to having instant access to power, as her flummoxed handling of Brash and Sassy smoothly led to yet another Newman Enterprises’ return.

But Heinle’s character is currently learning that her personal and business rugs can be pulled out from under her. She has only herself to blame. Time will tell if she fully admits that and then sincerely tries to adjust her view of reality.