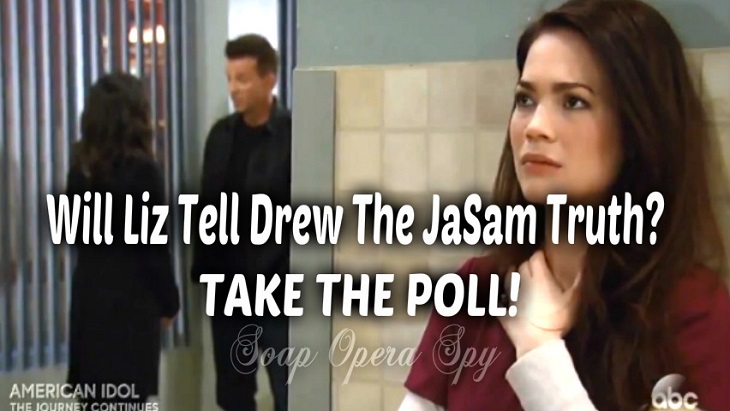 General Hospital’s (GH) Elizabeth “Liz” Webber (Rebecca Herbst) is known for being a busy body and always stirring the pot. Recently she was eavesdropping and found out some very juicy details about Sam Cain (Kelly Monaco) and Jason Morgan (Steve Burton). Now our question to you is do you think Liz will tell Drew Cain (Billy Miller) what she overheard about Sam and Jason?

Sam Cain recently came out of denial and admitted her feelings to Jason Morgan after an earthquake hit Port Charles. Their lives were at risk and in the heat of the moment it lead to them having a very serious decision. She admitted that she still loves Jason and never truly wanted him to stay away. She hoped each day that she ran into him.

Sam is now dealing with the guilt of her conversation and wants to tell her husband Drew Cain that she still in fact loves Jason Morgan, but she hasn’t been able to bring herself to do it just yet. Sam does not want to hurt Drew and is very confused because she has such deep feelings for both men.

Meanwhile, Liz Webber being the nosey one that she is stood by and listened in on a private conversation that Sam and Jason were having about the fact that they still loved one another. Liz has always tried to make trouble for Sam, so do you think she will run and tell Drew what she heard? She and Sam have been on better terms lately, but that never stops Liz when she thinks she is doing something for the right reasons or just out of spite! So do you think she will cause trouble once again for Sam and Drew?

Elizabeth Webber does care about Jason Morgan’s feelings so could that be enough to keep her quiet? If she was to put herself in the middle she is taking a chance of Jason being mad at her and she will not want that. Maybe since she and Sam have been getting along a lot better lately she will not want to mess that up, but you can never put anything past her!

So GH fans please take a vote in our poll and let us know if you think Liz will tell Drew or not. Don’t forget to check often with Soap Opera Spy for all your latest spoilers, news, updates, and much more.