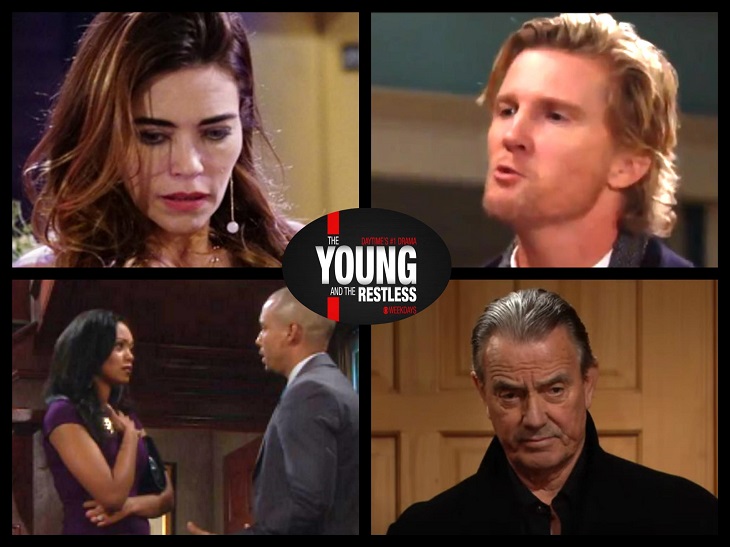 “The Young and the Restless” spoilers for Tuesday, March 13, tease that Hilary (Mishael Morgan) and Devon (Bryton James) will look forward to bringing a baby into the world. At Hamilton-Winters, they discuss their impending bundle of joy. Devon thinks they should nail down all the details soon.

When Lily (Christel Khalil) arrives, she immediately butts heads with Hilary (Mishael Morgan). Lily’s office space and position on the board of directions don’t go over well. Later, Michael (Christian LeBlanc) shows up to help Devon and Hilary with their baby agreement. Once Lily’s in the loop, she hits the roof. Lily feels like Devon’s gone nuts, but he insists this is how it’s going to be.

Lily meets up with Cane later and rants about Devon’s ill-advised move. She promises to halt this plan as soon as possible. Over with Michael and the soon-to-be parents, a deal is made. Devon and Hilary are ready to get the baby-making started.

At the ranch, Victoria confesses everything to Nikki (Melody Thomas Scott) and frets about the mess she made. Nikki worries that Victor will give Victoria the boot. When Victor finds Victoria later, he reprimands her once again for deceiving him. Victor suggests that maybe they can make something work, but Victoria will have to prove she’s worthy of sticking around.

At the Abbott mansion, Victor and Victoria make their pitch to Ashley (Eileen Davidson). Victoria apologizes for trying to get Ash thrown out of the company. Unfortunately, Ashley isn’t buying that Victoria’s actually sorry. Victor chimes in and offers to sweeten the pot. He reveals some extra benefits in hopes of scoring Ashley’s comeback.

Ashley decides to stick to her guns. She contends that it’s a “her or me” situation. Afterward, Victor frets to Nikki about his choice. He’s torn between Victoria’s abilities and Ashley’s loyalty, but Nikki thinks there might be another solution to Victor’s problem.

Back with Ashley, she fills Abby (Melissa Ordway) in on what went down. Abby’s happy that Ash showed she was in charge of this situation. She doesn’t want Victor and Victoria to walk all over her. Ashley vows to move forward with her lawsuit against Victor and Jack.

Across town, J.T. corners Victoria when she arrives home. He calls her out on her lies and gripes that he looked like a fool. Victoria breaks down in tears and offers a heartfelt apology. She wonders if J.T. intends to leave her, but he simply asks what she thinks. J.T. eventually walks away fuming.

It sounds like some exciting Y&R moments are coming up. We’ll give you updates as other “Young and the Restless” news and rumors emerge. Stay tuned to see what’s next in Genoa City.

MUST WATCH: The Bold And The Beautiful Preview Video Tuesday March 13