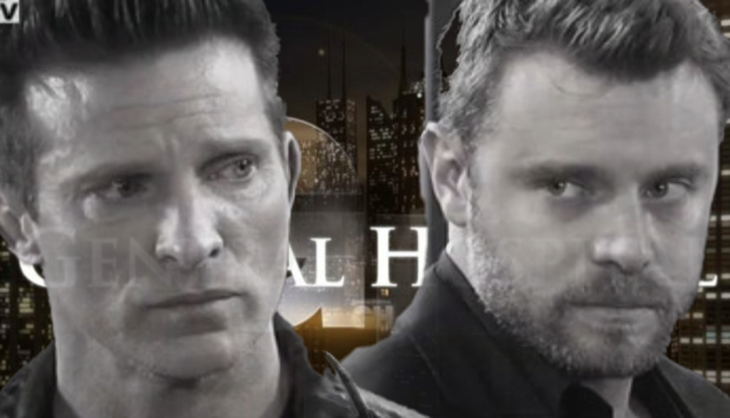 One question that has been on General Hospital fan’s minds for quite a while, is why does Drew Cain (Billy Miller) hate Jason Morgan Morgan (Steve Burton) so much?  We’ve broken down the reason’s we believe below, let us know if you agree?

Literally Dropped From The Sky

Plenty of General Hospital fans have asked this question in the past nine months yet we still don’t have a clear-cut answer. When Jason Morgan dropped out of the sky in the middle of the Aurora Launch Party, Drew  was nowhere around. Jason saw that Sam (Kelly Monaco) was in trouble and he literally busted through the roof to save her.

What Does Drew Really Know?

It was obvious from the moment Sonny (Maurice Benard) got Jason’s note that Drew was upset and by the time he arrived at Sonny’s that night Drew was furious. So why does Drew hate Jason so much? The theory of many fans is that Drew has known about Jason since 2012 and Jason was the only twin in the dark so to speak.

Faison (Anders Hove) told Jason that Drew knew more about Heinrik than he realized. Well we know that Faison found Drew in July 2012, Jason wasn’t shot until October, so what if Faison told Drew about Jason and he was jealous enough to willingly take Jason’s place?

We know nothing about Drew’s history other than he was given away at birth. So, let’s play devil’s advocate. What if Drew had a bad childhood, maybe his adoptive father was none other than Lucien Cain, which we know if an alias for Stavros, who we further know is a crazy loon to put it mildly. And lets further look at the fact that Drew very well could be like Heinrik and hate his mother over abandoning him.

How Does Drew Know Heinrik?

We know Heinrik (Wes Ramsey) went to boarding school but know nothing else until he showed up in Port Charles after drugging Jason for five years. What if they were in military boarding school together and bonded over their hate for their mothers. What if they were separated then and reunited later when Faison found Drew in the Navy Seal Team and set up a revenge plot to get even with the brother who was kept. So what if Drew willingly agreed to take over Jason’s life and work for Helena to get revenge on Jason.

We know Ava hit Drew by accident in 2014 and he lost his memory, well maybe that is why he didn’t actually remember agreeing to this plot and when he got Jason’s memories “back” or part of them anyway, he also got his own and kept it a secret and continued his plot to live Jason’s life and spend Jason’s money.

Is Money Really The Root Of All Evil?

Maybe the real reason that Jason was kept alive was not only to kill Faison but to be around in case Drew needed his memories and Jason’s escape foiled his plans. Maybe Drew’s true hatred toward Jason has nothing to do with Sam and everything to do with Jason’s money that Drew has proven he loves to spend.

Let us know what you think the reason is? And that’s a wrap. Don’t forget to check often with Soap Opera Spy for all your soap needs.

The Young and the Restless (YR) RUMOR: Sharon and Jack Renewing Relationship – Shack Pushes Shick Out?