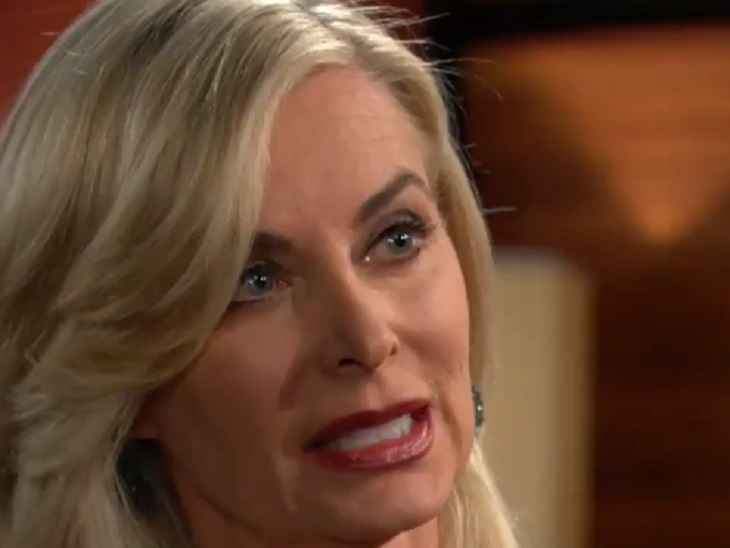 Ashley (Eileen Davidson) held a grudge against her brother Jack (Peter Bermgan) on ‘The Young and the Restless’. The rage she felt about the blood-Abbott clause ran so hot that Andrew (Coby Ryan McGlaughlin) was hired to manipulate paternity matters, or so this story seemed to go.

The just-elected head of Jabot paid Andrew to handle dirty work which was connected to her brother’s recent identity questions. Now McGlaughlin’s character is attempting to blackmail Ashley into giving him an endless double-payment for services rendered.

Well, it appears as that Jack’s struggle to find his true father was a goose chase after all. Teasers indicate that John Abbott (Jerry Douglas) will be restored as Jack’s father. If this happens the projected and much maligned storyline switch will be revealed as what executive producer and head writer Mal Young implied it was many months ago.

As devoted fans of this site know, in response to understandable fan feelings regarding Jack being stripped of his Abbott legacy, Young encouraged patience. Withholding judgment seemed only apt if Jack would remain an Abbott, regardless of his consideration of Phillip Chancellor II (Donnelly Rhodes), Neil Fenmore (Jim Storm), Stuart Brooks (Robert Colbert), and Albert Miller (George Kennedy) as alternative fathers. So, all readers agreed and went along with Jack’s soapy ride that was presented by Y&R.

A handful of weeks ago Ashley was seen meeting with Andrew, who has returned. Later dialogue appeared to match him to a mysterious company name that was listed on Jabot’s accounting statements. No one was familiar with that entity, which telegraphed the climax that has now arrived.

Andrew’s reappearance in Genoa City coincides with Davidson’s character’s imminent departure. The tenured Y&R cast member tendered her voluntary resignation from the cast months ago and has already filmed her final scene.

All of the above means Ashley’s au revoir is about to be seen. The French word for goodbye is apt due to her mother’s backstory and spring reveal about Jack. Yes, Dina ‘Madame’ Mergeron (Marla Adams) unleashed yet another torrent of family emotion via her reveal, but doesn’t seem to have changed history this time.