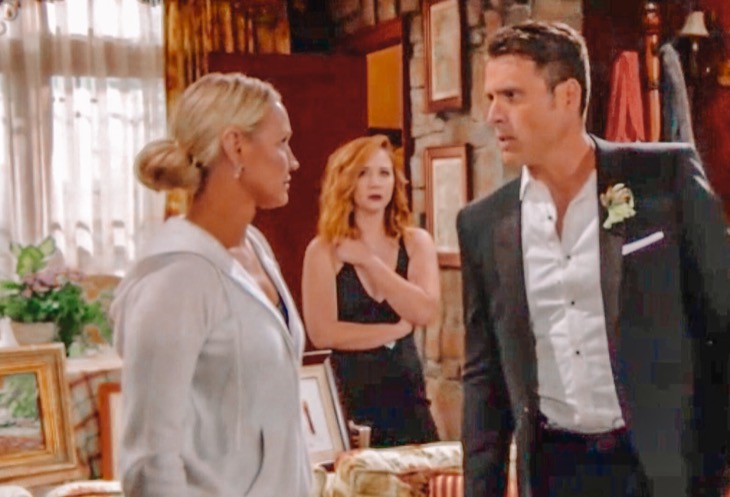 Fans of Sharon (Sharon Case) and Nick (Joshua Morrow) have been waiting for more than a decade for ‘Shick’ remarry on ‘The Young and the Restless’. After being teased all the way to the altar in 2014, does this specific segment of Y&R’s audience deserve better now that it looks like Sharon and Nick may never retie the knot?

Soap operas are about drama. No Genoa City fan, regardless of whether he, or she likes ‘Shick’, disagrees with that statement. But let’s unpack what’s just been given to the audience.

Cassie’s (Camryn Grimes) death, due to the injuries she suffered in a car accident, was created in order to split Sharon and Nick. All in charge of Y&R thirteen years ago believed that Case and Morrow’s legacy characters would be best served if they explored separate storylines. Those decision-makers are long gone, so fans don’t know if that back office contingent would have eventually written ‘Shick’ back together.

In 2014, viewers were led to believe that Sharon and Nick were finally going to get remarried. But that hope proved to be a ruse, as the recast of Phyllis (with Michelle Stafford departing, Gina Tognoni was hired) arrived at the chapel and stopped the nuptials by revealing that Sharon had withheld information from Nick about Summer’s (Hunter King) paternity.

Now, four falls later, the climax was switched, as Sharon arrived purposely late. She read half of her vows, tore up the paper she wrote them on old-school, and then revealed that Nick had withheld his having been with Phyllis after he thought ‘Shick’ split earlier that day.

To take the audience all this way by having killed off Sage (Kelly Sullivan), written out Dylan (Steve Burton) and Scott (Daniel Hall), fully revealed and solved the Christian (Jude and Ozzy McGuigen) storyline by having Sharon play hero and then to allow ‘Shick’ to reconnect and plan to marry felt purposeful.

Of course, Sharon and Nick could work things out in coming weeks, or months, or years. That’s always been the possibility. But will ‘Shick’ ever remarry?

Fans of ‘The Young and the Restless’ rightfully express their opinions on a regular basis. So, do ‘Shick’ fans deserve better, should they have expected remarriage plans to fall apart, or doesn’t it matter after all these years? Please vote in our poll below!