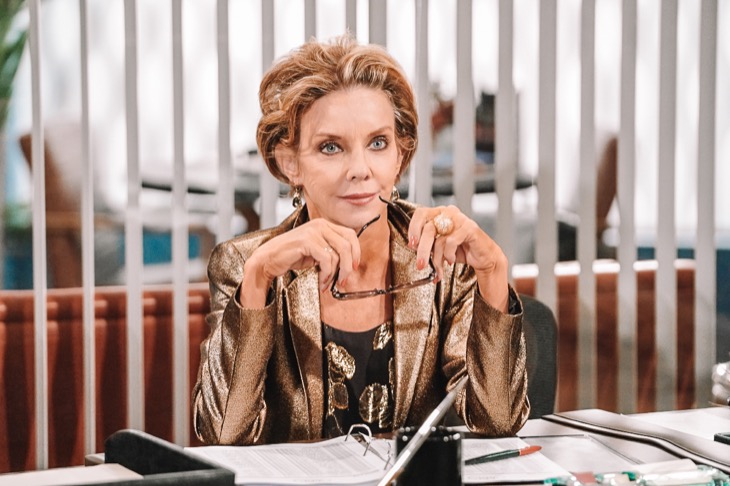 Judith Chapman (Gloria) might be leaving ‘The Young and the Restless’, but that’s not certain yet. Her recurring contract on Y&R isn’t known to be ending. So it remains possible that Chapman will still be seen as Gloria in Genoa City.

This terrific actor made her soap opera debut on As the World Turns. She later was part of the casts of One Life to Live, Ryan’s Hope, and General Hospital. Chapman also crossed over from Y&R to The Bold and the Beautiful as Gloria.

The veteran actor played on the nighttime soap, Flamingo Road, as did Morgan Fairchild. That point links to Chapman’s recent daytime employment, as she also played Anjelica on DOOL nearly three decades ago. Fairchild assumed the role last year.

This time around, Chapman will be playing Diana, who is Leo’s (Greg Rikaart) mother. DOOL fans know that Rikaart’s character wasn’t actually killed off earlier this year, as was suspected. Instead, another character, Matthew, is now known to have succumbed.

It’s not enough for Kyle that he got Gloria to betray her boss-he’s still being threatening to her, using her against Billy. She feels guilty when Billy tells her to send problematic people to him instead of being hassled. #YR #Philly #TheAbbotts pic.twitter.com/99fThSTEkj

Y&R fans will surely be interested to see Chapman and Rikaart work together again, as they first teamed up on-set in 2005, when Gloria was introduced as Kevin and Michael’s (Christian Le Blanc) mother. Chapman’s run proved, or is proving, to be fantastic.

Currently, Gloria’s main role is Jabot’s executive assistant. Jack’s (Peter Bergman) right hand choice was a stunner when it was first announced in the recent past. Gloria has continued to serve as Billy’s (Jason Thompson) aide in recent months, though he’s on his way out. That plot point could be used to explain the exit of Chapman’s character, if she’ll be leaving.

Due to her recurring status on Y&R and the vast change in the soap opera landscape that has taken place since Chapman first joined the genre, it is possible for the actor to handle work on both shows. This assumes that Y&R would continue to provide fresh scripts and that Chapman remains interested in remaining as Gloria, whose presence in Genoa City has unfortunately been lessened in recent years.

Sony Pictures produces both shows. That business point would help to facilitate a hopeful sharing of Chapman’s talent.