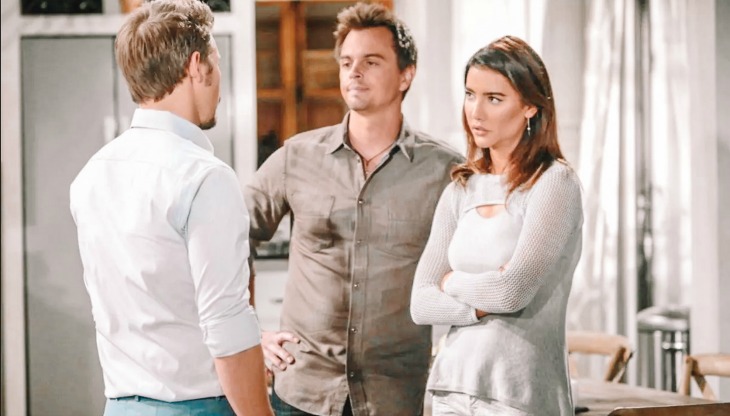 The Bold and the Beautiful rumors indicate that Steffy (Jacqueline MacInnes Wood) and Wyatt (Darin Brooks) could be headed towards a romantic reunion.

Upcoming spoilers indicate the formers spouses share a close moment when Steffy offers a Wyatt a job at Forrester Creations.

B&B viewers will remember that Steffy and Wyatt were married briefly when Steffy believed that Liam (Scott Clifton) had dumped her and left town. Unbeknownst to the couple, Wyatt’s mother Quinn (Rena Sofer) had kidnapped an amnesiac Liam. After learning the truth about Liam’s disappearance, Steffy and Wyatt divorced and she went back to Liam.

Bill pleads his case to Wyatt and Liam before making a last ditch attempt to guilt Liam into taking his side. WATCH FULL EPISODE: https://t.co/meyBlK0sWu #BoldandtheBeautiful pic.twitter.com/EsfknQ5gUW

Since their divorce, Wyatt has had relationships with Katie Logan (Heather Tom) and Sally Spectra (Courtney Hope). As for Steffy, she and Liam married and had a daughter named Kelly. But their marriage was broke up due to Steffy’s one night stand with Bill (Don Diamont). Despite an attempt at reconciliation, Hope’s (Annika Noelle) pregnancy put a damper on those plans.

With Liam and Hope married and starting their own family, Steffy’s moved on with her life. Her main priorities is being a good mother to Kelly and running Forrester Creations.

But it looks like Steffy’s personal life will once again heat up thanks to Wyatt.

The Bold and the Beautiful Spoilers: Bill Determined To Be A Better Father – Bonds With Kelly

With Wyatt coming back to Forrester Creations, he and Steffy will be spending a lot of time together and that could lead to sparks reigniting between the two.

While fans may be excited at the two reuniting, there’s going to be problems. First, there’s Wyatt’s relationship with Sally. The redhead isn’t going to be pleased about her boyfriend and her boss/new best friend Steffy working so closely.

Aside from Sally, Liam’s also going to be a problem. Liam’s known to be jealous and he’s not going to like seeing Steffy in a new relationship, especially with his brother. His jealousy towards the couple will cause trouble in his marriage to Hope, who will no doubt have her own opinion on the matter.