The Young and the Restless Spoilers: Jack Wants To Win Kerry’s Heart Or Is He Using Her To Spy On Jabot? 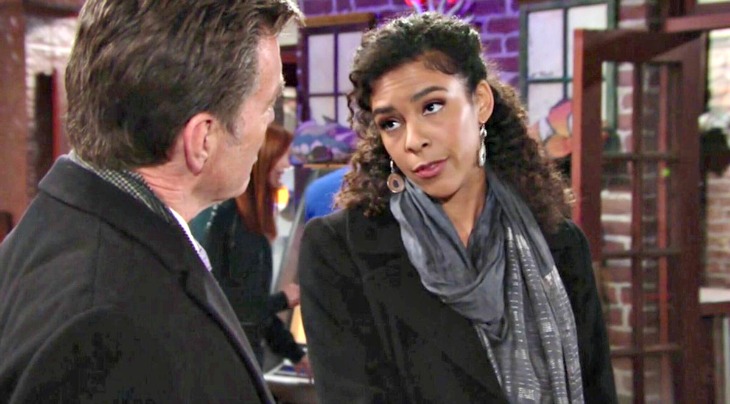 The Young and the Restless spoilers indicate that newcomer Kerry (Alice Hunter) could be hooking up with one of Genoa City’s bachelors.

The new lab assistant at Jabot has been getting a lot of screen time thanks to her job, but her personal life may be the focus of her storyline moving forward.

Kerry has been spending a lot of time with Jack (Peter Bergman), leading many viewers to assume that the two are going to engage in a romance. But given the drama that’s went down at Jabot, you have to wonder is Jack falling in love with Kerry or using her to keep tabs on the company?

While Jack seems to be the leading candidate for Kerry’s love interest, there are a few other men that could make a play for the young woman.

Phyllis: I have landed my first potential hire, and she is a great one. In fact. Let me introduce to you, Miss Kerry Johnson…Kerry has decided to join Jabot as our lead chemist, but only if I am elected CEO. #YR pic.twitter.com/7p4Q4hLjli

First, there’s Nate (Brooks Darnell), who shared a brief meeting with Kerry when he and Jack had lunch at the athletic club. For a while it looked like Nate would be paired with Victoria (Amelia Heinle), but their relationship never went anywhere. With Nate single, Kerry would be a good match for the handsome doctor.

Another candidate on the list is Devon (Bryton James). He hasn’t gotten much airtime since Hilary’s (Mishel Morgan) death and Lily’s (Christel Khalil) incarceration. While Hevon fans may not be so welcoming towards Devon getting involved with another woman, with enough time and the right storytelling, Kerry may be the woman to help him find love again.

Another possibility and a longshot is Billy (Jason Thompson). The two work together and given how Kerry is Phyllis’ (Gina Tognoni) biggest supporter, Billy could use that to cause jealousy with his ex. However, it seems like the show is leaning more towards Billy romancing Sharon (Sharon Case), so Kerry isn’t going to be Billy’s next conquest.

Will Jack be the one to win Kerry’s heart? Or will one of these other men swoop her off her feet?