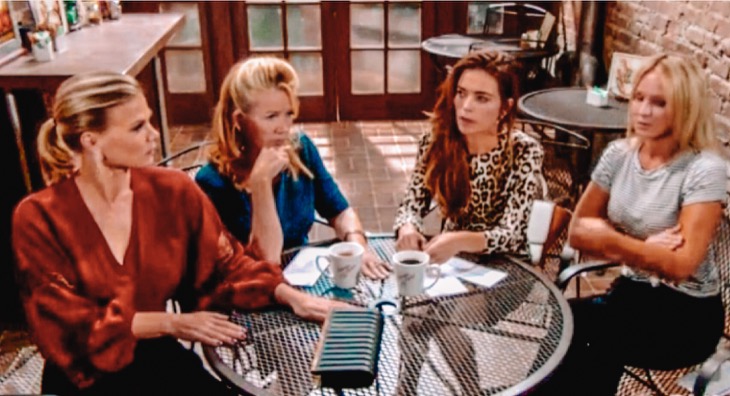 Tessa (Cait Fairbanks) has been playing it cool on ‘The Young and the Restless’. She claims to be grateful for Sharon’s (Sharon Case) generosity. But is Miss Porter actually blackmailing her and the coverup crew?

Circumstantial evidence is all that viewers have right now. Keeping with offered clues, they know that Tessa supposedly owes a lot of money to human trafficker’s who helped her to smuggle Crystal (Morgan Obenreder) across the border into Canada. That’s the story Mariah (Camryn Grimes) was told. She, along with all Genoa City observers don’t have evidence of whatever is true. Instead, they only have Tessa’s word. Hmm.

WAIT is it just me or are they all suspecting Tessa for sending them the letters?? No #teriah #yr pic.twitter.com/y5wi8bx1u3

Fairbank’s character previously lifted Mariah’s words in order to create a song. Devon (Bryton James) didn’t take kindly to learning that the talent he inked to a recording contract infringed upon another person’s intellectual property. While fired from that plum spot, Tessa was allowed to remain at the Hamilton-Winters group as an administrative assistant. She later supposedly bolted with her sister to the national line between the United States and Canada.

Okay, so Tessa has been deceptive in the recent past on more than one occasion. But how would she have the capacity to blackmail Sharon and the others?

Based upon her connection to Mariah, Tessa was hired by Sharon to work at Crimson Lights. Speculation would allow Y&R fans to believe that Tessa overhead one of the many reckless, public references any member of the coverup crew made about the J.T. (Thad Luckinbill) mess in recent weeks.

A quick score can be had via the anonymous threat that was sent to Sharon, Vickie (Amelia Heinle), Nikki (Melody Thomas Scott), and Phyllis (Gina Tognoni). Viewers are waiting to see if a monied request is made while all members of this forced contingent consider who is blackmailing them.

Assuming Rey (Jordi Vilasuso) isn’t using aggressive tactics to trap the quartet, it’s fair to place Tessa in suspect status. If this line of thought proves wrong, she should realize that repeated disregard for Mariah, along with other sketchy behavior made her look suspicious.

The Bold and The Beautiful RUMORS: B&B Love Triangle, Bill Must Choose ‘BRILL’ or ‘STEAM’