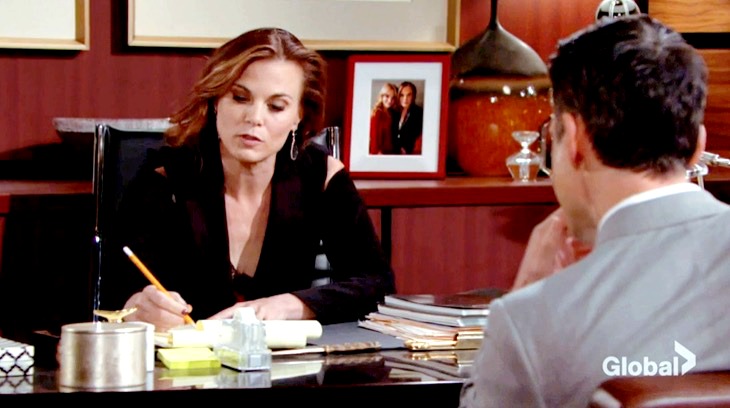 “The Young and the Restless” spoilers for Friday, November 30, tease that Ana (Loren Lott) will make a troubling discovery. At Devon’s (Bryton James) penthouse, Ana finds a baggie of drugs tucked in the sofa. She calls Cane (Daniel Goddard) for backup and they ponder this shocking find together.

When Shauna’s (Camryn Hamm) confronted, she promises they don’t belong to her. Shauna only invites Charlie (Noah Alexander Gerry) over, so the drugs don’t belong to her friends either. She reveals that Devon’s been hanging out with a rough crowd. Shauna’s been hiding out in her room when they come over, but she’s uneasy about the situation.

Cane lets Shauna know he’s going to take care of it. Changes are brewing and he’s not asking Devon’s permission to make them. Meanwhile, Devon encounters Abby (Melissa Ordway) at Crimson Lights. He’s wearing sunglasses and seems out of it. Abby suggests Devon could use a good meal and some sleep.

The Young and The Restless Spoilers – Devon Downplays The Drugs

Devon heads home and faces Cane’s complaints. When Devon tries to downplay the seriousness of the drug issue, Cane doesn’t let him. He explains that Shauna will be heading back to her parents in Colorado. Devon’s upset since he vowed to look after her for Hilary (Mishael Morgan), but Cane insists there are other ways to do that. Shauna can’t live under Devon’s roof when he’s letting wild strangers in.

Are you worried for Devon? #YR pic.twitter.com/FjczECI7YQ

Devon kicks Cane out and has a hard time breathing. He grips his chest as an apparent medical crisis hits. At Jabot, Phyllis suspects Billy (Jason Thompson) and Kyle (Michael Mealor) are plotting something. She gets Kerry (Alice Hunter) to help her out by looking into it.

Later, Phyllis tells Billy the jig is up. She knows they tried to hijack her meeting with Rebecca Barlow, someone Jabot is hoping to collaborate with. Phyllis basically throws Kyle off the project and takes his place. She works long hours with Billy on a special marketing pitch and their time together goes well. Billy and Phyllis are on the same page about being a creative and powerful team.

Nick (Joshua Morrow) texts Phyllis about when she might be home, but she suggests he shouldn’t wait up. Phyllis goes back to working with Billy, but trouble may be brewing. In a moment alone with Kyle, Billy implies that he may be using a strategy with Phyllis. He contends that he has to be smart about how he handles her.

Elsewhere, Abby isn’t so sure she made the right call. She has buyer’s remorse over the property deal, but Arturo’s news puts a smile on her face. He explains that there are new developments happening in that area, so Abby’s investment will pay off. Arturo and Abby enjoy some wine as part of their little celebration.

Mia Is Planning A Huge Gathering

At Rey’s (Jordi Vilasuso) place, he finds out about Mia’s (Noemi Gonzalez) plan for a gathering. She brings home supplies and mentions several prominent Genoa City residents she wants to invite. Mia intends to do some schmoozing with all the right people – including Sharon (Sharon Case) and Mariah (Camryn Grimes). Rey doesn’t seem happy about it, but Mia insists on an evening with the ladies.

“The Young and the Restless” spoilers say some hot drama’s ahead, so don’t miss all the action. We’ll give you updates as other Y&R details and rumors emerge. Stay tuned to see what’s next on the CBS soap.