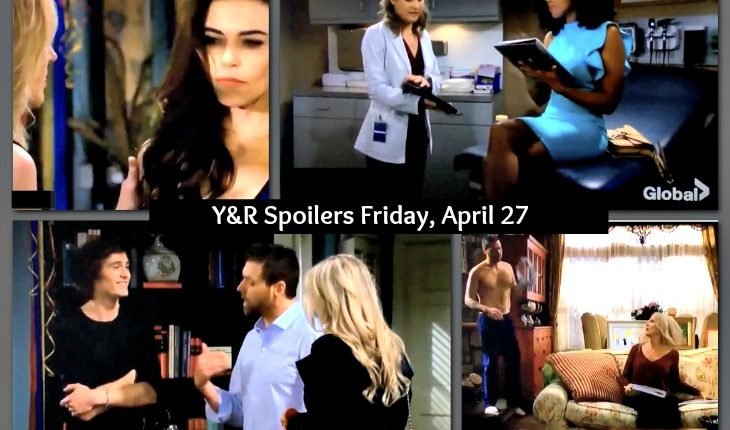 “The Young and the Restless” spoilers for Friday, April 27, tease that some terrible news is headed Hilary’s (Mishael Morgan) way. At her OB-GYN appointment, the doctor informs Hilary that she had a chemical pregnancy. It caused the test to show a positive result, but she doesn’t have a bun in the oven.

Hilary’s still reeling when she approaches Devon (Bryton James), who’s with Simone (Shanica Knowles) at the athletic club. When Hilary requests a moment alone, Devon isn’t willing to give her one. Hilary brings up her recent OB-GYN appointment and suggests that’s all she wanted to mention.

Later, Hilary gets emotional over fans’ gifts for the baby. Mariah (Camryn Grimes) gushes over them while they’re on the air. Meanwhile, Kyle (Michael Mealor) takes Dina out to eat and tries to find out who Jack’s (Peter Bergman) father was. He lets Dina believe he’s her old lover and pushes her to use his name. Dina can’t remember it, so Kyle’s out of luck for now.

At home, Dina seems cheerful after bonding with Kyle. Abby’s (Melissa Ordway) pleased, so she encourages Kyle to keep up the good work. Over with Victoria (Amelia Heinle), she plans a farewell gathering for Reed (Tristan Lake Leabu). He’s glum since J.T. (Thad Luckinbell) obviously won’t be around for it.

Billy (Jason Thompson) is also on hand to give Reed to parting words of wisdom. When Billy catches up with Nick, they marvel over the friendship changes in town. Nikki, Phyllis, Victoria, and Sharon have certainly been spending a lot of time together.

Mattie (Lexie Stevenson) pops into the party to tell Reed goodbye. They put the past behind them and enjoy a hug. Reed feels certain that he’ll get his life straightened out and come back to town someday. After the shindig wraps up, Victoria is a bit weepy. Reed comforts her and argues that J.T.’s the only one responsible for his absence.

Victor’s stuck at home due to his doctor’s orders, but it’s OK since he already said farewell to Reed earlier. Arturo (Jason Canela) is eventually called over for a meeting. Victor tries to rattle him a bit and pushes for an admission of his involvement with Nikki. Arturo holds his own, but Victor isn’t happy!

When Nikki comes home, Victor talks about how he doesn’t trust Arturo. Nikki isn’t willing to fire him, so Victor makes his position clear. He hints that they’ll have serious issues if Nikki doesn’t cut Arturo loose. Back with Phyllis, she corners Sharon and orders her to keep her mouth shut. They’ve come too far to blow this now.

“The Young and the Restless” spoilers say some great scenes are coming up. We’ll give you updates as other Y&R details and rumors emerge. Stay tuned to see what else is ahead on the CBS soap.