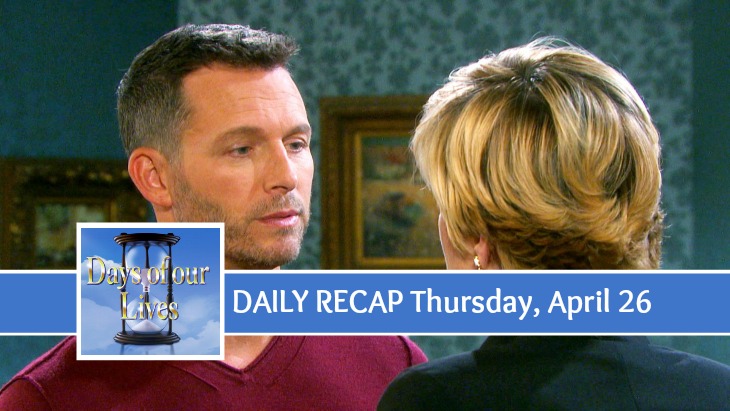 Days of Our Lives recap for April 26 begins with Eric (Greg Vaughan) and Jennifer (Melissa Reeves). Jennifer can’t read her own writing, Eric helps her to read the quote. They turn off their phones and kiss. Jennifer talks about being proud of herself for making it on her own but she loves being in love.

Abby Frightened She Will Lose Chad

Steve (Stephan Nichols) and Kayla (Mary Beth Evans) at the hospital talking about Abby (Marci Miller). Steve tells Kayla that Abby was on the phone talking about not wanting to lose the man she loves. She told him that she and Chad (Billy Flynn) had a fight over Stephan (Tyler Christopher) but Chad has done much worse.

Claire Caught In The Act

Days of Our Lives Ciara (Victoria Konefal) apologizes to Tripp (Lucas Adams) but tells him there is no way she is going to let Claire (Olivia Rose Keegan) get away with cheating. Wyatt (Scott Shilstone) shows up at Ciara’s apartment. Claire gets a text from Wyatt’s phone “I know what you did you cheating bitch.” Tripp tells Ciara that this contest has caused them problems since day one. He doesn’t care who wins, when it comes out and she’s the winner, she might not be here anymore. Claire and Wyatt talking, she calls him a moron because of his password. Together they say this means they are screwed.

Tripp tells Ciara that confident people don’t have to prove themselves, Claire is the insecure one. He thinks Claire is in a bad place right now. Ciara says she’s going to go have it out with Claire and he agrees to go with her. Wyatt and Claire still arguing, she moves to leave, Ciara and Tripp arrive before she can. Ciara tells her she’s tired of her having to get everything she wants. She could not handle not winning this contest so she has him to help. He just wanted her back, if she lost by one vote, then it would be trouble between Ciara and Tripp. Claire gets why she’s mad, she tries to say she didn’t lie.

Claire Offers To Step Down As The Face As Bella

Tripp tells her that she only did it to come between them. Ciara tells Claire she won fair and square, Claire wants to know what she’s going to do to her. Ciara tells her she already did it, she ran into Eve and Brady and told them everything except who helped her. Ciara never wants to see Wyatt again and she is going to tell Eve and Brady the whole story tomorrow Tripp opens the door and tells Wyatt to leave. Claire offers to step down as the new face of Bella. Ciara says no, it’s not going to be that easy. Claire tells them she told herself she deserved to win this contest. She just got jealous and that she really is sorry, she swears to never do anything like this again. Tripp and Ciara just look at each other after Claire goes to her room.

The Wrong Person Is Drugged

Days of Our Lives, The henchman is on the phone talking about drugging Lucas ( Bryan Dattilo), however, Brady (Eric Martsolf) ended up with that drink. Chloe (Nadia Bjorlin) takes a selfie and then Brady says he and Eve need to leave. Chloe covers the tab, they all toast. Lucas is feeling bad, he’s still drinking the club soda. Chloe turns on the air conditioner and tells Lucas she was afraid something was wrong with him. Later, after talking to his boss and telling him how the drugs should be working on Lucas by now, he sees Eve and Brady and realizes that the wrong person got the drink. Chloe and Lucas talking about how they had wanted to get in touch with each other over the past couple of years but were afraid of rejection. She says she loves Salem and chose this life, she would never regret that. Lucas says he will make it his life’s mission to prove to Chloe she was wrong to give up on love.

Brady Wants Eve to Go To Paris Or Tahiti With Him

Days of Our Lives Brady and Eve (Kassie DiPaiva) end up at the Horton Square, he wants them to go to Paris or Tahiti. He says things will be fine without them for a couple days. They were meant to be together, he pulls out a ring and tells her to look at it. He says he’s keeping that ring on him and hopefully, she will ask him to put it back on her finger. They kiss and decide on Paris and walk on into the square.

Brady and Eve walk up to Ciara and Tripp and tell her they are sorry she didn’t win, but they still want her to model for the magazine. She tells them Claire cheated. They say this can’t be true and want to know how she cheated. Ciara tells them she has texts to prove it and that she didn’t do it alone. Eve begs Brady to tell her that he didn’t help. Eve doesn’t believe Brady and tells him he can’t be trusted. Brady begs Eve to believe him, she refuses. Brady starts slurring words and Eve wants to know what’s wrong with him. Eve tells Brady she doesn’t want anything to do with him ever again.

The Bold and the Beautiful Spoilers Friday, April 27: Wyatt’s Shocking Move – Bill Won’t Back Down