The Young and the Restless Poll: Which Member Most Likely Blows the Coverup Crew’s Secret? 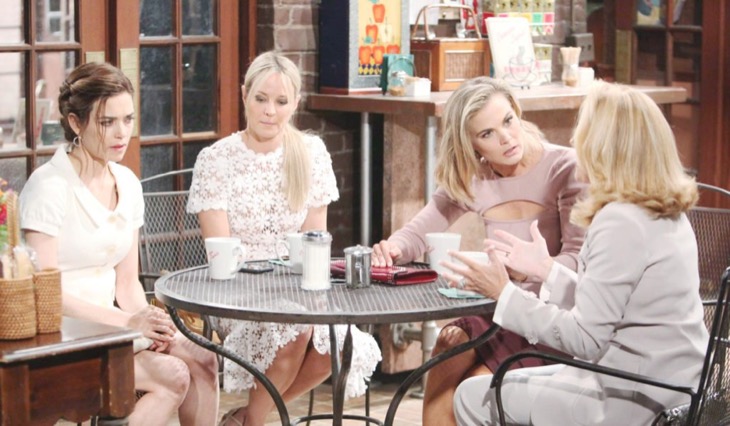 As pressure increases, at least one member of the cover-up crew could blow the group’s secret on ‘The Young and the Restless’. But who will it be, Nikki (Melody Thomas Scott), Vickie (Amelia Heinle), Phyllis (Gina Tognoni), or Sharon (Sharon Case)?

Starting at the end of the last sentence, Sharon has long been considered the so-called “weakest link”. The assessment made by her co-conspirators is steeped in this character’s mental health history and based on the fact that she initially and repeatedly pressed coming clean to the authorities.

Sharon’s proximity to Rey (Jordi Vilasuso) at the police department and now, on a personal basis, does afford multiple opportunities to slip up. However, today’s Sharon is on her medication and has a balanced take on life. So, maybe she’s no more prone to break than the other three ladies.

Phyllis has a new, high-profile job. She’s the head of Jabot. As such, her focus has shifted from last spring’s coverup, which she led, to cosmetics.

While she seems to be the toughest nail in this foursome, Christine (Lauralee Bell) remains ever-ready to pounce on her longtime nemesis. If Genoa City’s District Attorney even finds one bit of evidence that connects Phyllis to J.T.’s (Thad Luckinbill) murder and unlawful burial, Jabot will be looking for yet another Chief Executive Officer. The personal history between ‘Red’ and ‘Cricket’ is a wild card.

Vickie made an honorable move months ago. She went to Paul (Doug Davidson) and made up a story that was intended to let her mom, Sharon, and Phyllis off the hook. However, by stating, on the record, that she (Victoria) helped J.T. escape town, a series of other lies became necessary and are hard to juggle indefinitely.

Rey’s questioning of Vickie this week surely sets the soapy stage for further interrogation if another break in the case happens. Michael (Christian Le Blanc) feels his client isn’t telling him the truth and will be prepared to battle for her if he can.

And finally, there’s Nikki. Her Multiple Sclerosis flare-ups resulted during times of great stress in the past. Rey would not be above using a coming malady strike to create a forced confession under duress.

But, rather than rely on what might happen, the digital payoff Nikki made to Tessa (Cait Fairbanks) could prove to be the real key in a line of questioning that blows this case open. Now that Mariah (Camryn Grimes) knows the truth, how long will it be until everyone else, including Rey, does?

Think Rey will put these 4 on the suspect list? #YR pic.twitter.com/g9uSpGeRw6

Fans of ‘The Young and the Restless’ rightfully express their opinions on a regular basis. So, which member is most likely to blow the cover-up crew’s secret? Please vote in our poll below!