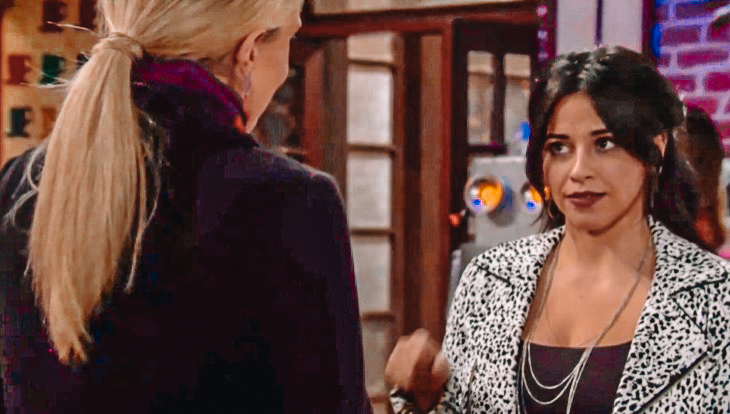 “The Young and the Restless” spoilers for Thursday, November 15, tease that the rest of Tessa’s (Cait Fairbanks) confession will be tough to hear.  At her studio, Tessa shows Mariah (Camryn Grimes) some security footage.  It features the cover-up crew stuffing J.T.’s (Thad Luckinbill) corpse into the trunk of a car.

Next, Tessa explains how she got her hands on this video.  She talks about stumbling across files at Dark Horse, which included surveillance footage from the cameras J.T. set up.  Tessa admits to sending the letters and bumping up the blackmail amount to avoid suspicion.

Mariah’s understandably upset that Tessa targeted Sharon (Sharon Case).  Tessa protests that she had to get the baddies off her back.  Between the attack she faced and Mariah being followed, Tessa was desperate to do something.  She wishes she could be a better person and promises she wasn’t going to call the cops on them.  Mariah sobs about not being able to forgive this before taking off.

The Young and The Restless Spoilers The Jaboutiques Launch Party Starts

On our way to the Jaboutiques launch party like… 😂 Make sure to tune in to #YR tomorrow! pic.twitter.com/gi1asG16DC

Phyllis, Lauren (Tracey E. Bregman) and Kerry (Alice Hunter) also announce the reason for the shindig. The guests learn all about Jaboutiques and what these ladies want to accomplish.  Billy isn’t pleased about Phyllis’ time in the limelight.  He argues with her over taking credit for his work.

Meanwhile, Nick pesters Sharon about her date as well as Rey.  Phyllis eventually appears to break up their conversation.  She’s not keen on being a power couple and having fought in public.  Nearby, Jack (Peter Bergman) and Kerry enjoy dancing together.  When she’s ready to leave, Jack’s a gentleman and takes Kerry to her car.

Over with Abby (Melissa Ordway), she fishes for info on Rey and Arturo’s (Jason Canela) conflict.  Abby wants answers from Mia, who advises against getting stuck in the drama.  Arturo does his best to get Abby away from Mia.  He clearly doesn’t want his secret to come out, but Mia takes care of that anyway.  During a confrontation with Rey, she insists that he drove her to have an affair with Arturo.

Next Week on #YR, Rey has questions for Victoria, @inoemigonzalez makes her Y&R debut, and Sharon and Billy put on a show at the Jaboutiques launch party! pic.twitter.com/7jugHi8uh0

“The Young and the Restless” spoilers say the action’s about to heat up in Genoa City.  We’ll give you updates as other Y&R news and rumors emerge.  Stay tuned to see what’s next on the CBS soap.

Days of Our Lives Recap November 14: Abby Gets Committed – Brady Confesses To Paul