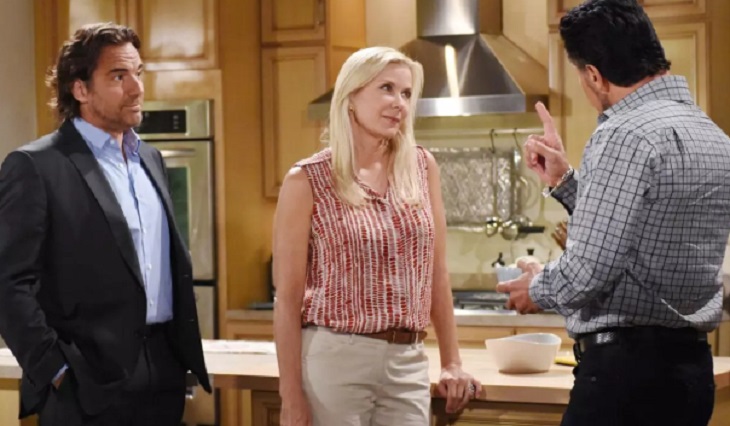 The Bold and the Beautiful spoilers indicate that Ridge’s (Thorsten Kaye) anger towards Bill (Don Diamont) could land Mr. Spencer in the hospital.

It’s well-known that Ridge and Bill don’t like each other. Their feud has been going on for years, but in recent months things have become heated between the two men.

It looked like their feud had finally calmed down after Kelly’s birth, yet in the past few weeks the two men are once again at odds.

Brooke and Ridge’s marriage is on the brink of collapse as they accuse each other of betrayal and duplicity. WATCH FULL EPISODE: https://t.co/onZ8O2xxqY #BoldandBeautiful pic.twitter.com/MAFqcHqdZa

When Katie (Heather Tom) decided to take Thorne’s (Ingo Rademacher) advice and sue for full custody of Will (Finnegan George). Ridge was determined to get Bill out of Will’s life and did everything he could to make it happen, including blackmailing the judge. Ridge’s actions helped Katie’s case, however it may have cost him the end of his marriage.

Brooke (Katherine Kelly Lang) was on Bill’s side during the custody battle. After the verdict was rendered, Brooke learned about Ridge’s blackmail and told Bill. During their conversation, Brooke and Bill shared a kiss, which was witnessed by Steffy.

Believing that he deserved the truth, Steffy told Ridge about the kiss, which infuriated him. Ridge is known to have anger problems and learning about Bill kissing his wife is going to drive Ridge over the edge.

With his fury out of control, Ridge is bound to confront Bill and that could only lead to more trouble. Upcoming spoilers reveal that Bill is going to be hospitalized after a heated confrontation with Ridge. His hospitalization is going to cause lots of turmoil for the Forrester and Spencer clans. Brooke and Ridge’s relationship will further be strained by his actions. Plus, Katie will have second thoughts about Will’s custody arrangement, which may cause problems with her and Throne.

The Young and the Restless (YR) Spoilers: Jack Primed To Lead Jabot Again – Ashley Shamed Out of Town

The Young and the Restless RECAP Tuesday, October 16: Ashley Ousted From Jabot