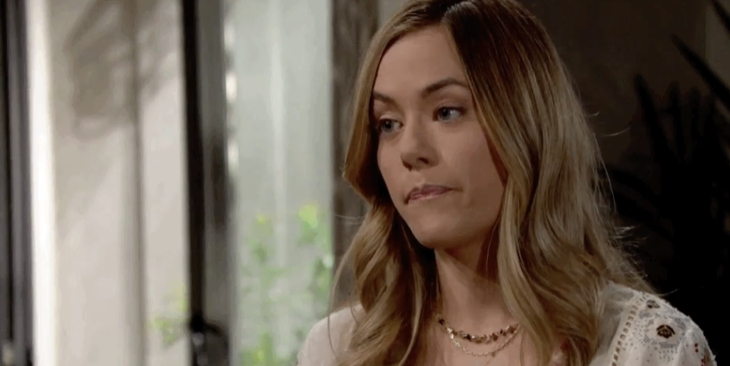 “The Bold and the Beautiful” (BB) recap for Thursday, July 12, 2018 reveals that over at Wyatt Spencer’s (Darin Brooks) place, Liam Spencer (Scott Clifton) pays his brother a visit.

Liam asks how Sally Spectra’s (Courtney Hope) new job is going. Liam admires the painting. Talk turns to how Liam is handling things. Liam reveals Hope Logan (Annika Noelle) is pregnant. Wyatt is shocked. Wyatt asks how Steffy Forrester Spencer (Jacqueline Wood) took the news. Liam says she is handling it. He then tells him he told Steffy he needed time to think.

Wyatt points out that Liam loves both women. Wyatt says he is glad he is not Liam. Liam asks him if he has any sage advice. Wyatt points out he knows nothing about relationships. Liam doesn’t know what he is going to do.

At Forrester Creations, Thorne Forrester (Ingo Rademacher) and Katie Logan (Heather Tom) continue to question Sally Spectra. Sally insists she has done nothing wrong. Thorne tells her she needs to admit what she has done and even if she doesn’t she is finished there. They show her the comments and Sally tells them they have the wrong person. They let Sally know they hired an IT specialist. She points out they’re overreacting. Sally suggest they keep looking because it wasn’t her.

Hope’s not giving up this time. #BoldandBeautiful pic.twitter.com/EOcFwlyXvm

Hope Assures Steffy Liam Will Come Back To Her

Hope Logan goes to the cliff house and pays Steffy Forrester Spencer a visit. Hope tells Steffy that it must have been quite a shock learning that she was pregnant. Steffy points out that it doesn’t change anything. She tells Hope the pregnancy changes things for her, but not she and Liam. Steffy says her and Liam’s situation will stay the same. Hope points out she is carrying Liam’s child and Steffy reminds her she has a child with him as well.

Hope agrees with Steffy that a child needs both of it’s parents. Steffy tells her not to interfere with her family. They both agree that it is important they understand each other. Hope does not think either of them should speak for Liam. Hope then tells Steffy she is going to fight for her family. Steffy tells Hope that she is creating a fantasy. Hope tells Steffy that she knows Liam will come back to her.

We’ve got a furry new addition to the #BoldandBeautiful cast! 😻 pic.twitter.com/DsUSFlaPTZ

Zoe (Kiara Barnes) talks to her cat telling it that she met the other woman today and not to worry daddy is coming back. She talks about how easy it was to find Xander Avant (Adian Bradley) and how she sought out Wyatt Spencer since his mom worked at Forrester. She goes on to say she had to be very sneaky to use Sally Spectra’s laptop to make those post so they would trace them back to her. Zoe talks to Xander’s pictures and says Emma Barber (Nia Sioux) will not be a problem for long. And that’s a wrap. Don’t forget to check often with Soap Opera Spy for all your soap needs.