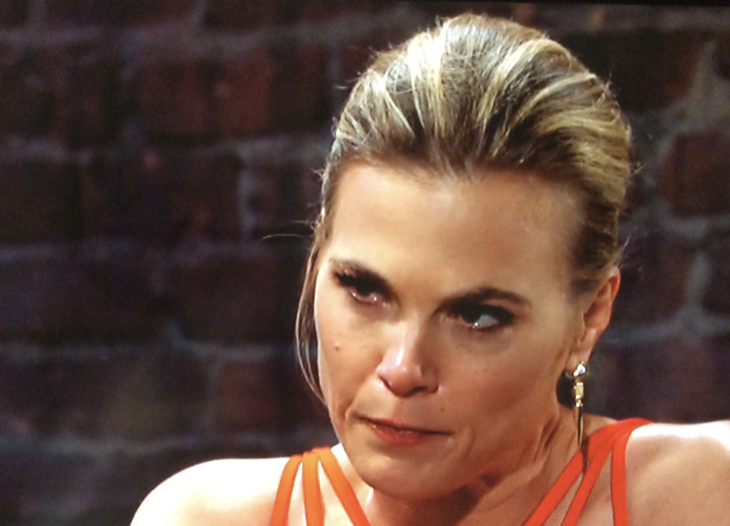 “The Young and the Restless” (YR) recap for Thursday, July 12, 2018 reveals that over at Jabot, Kyle Abbott (Michael Mealor) catches Ashley Abbott (Eileen Davidson) going through all of Billy Abbott’s (Jason Thompson) files on his desk. She has questions about the new expenses but Kyle can’t help her.

At Summer Newman’s (Hunter King) apartment, she learns that Billy Abbott is hungover and did not win the yacht back. Billy is telling her how things went down when Summer suddenly yells she owes her mom and explanation. Phyllis Summers (Gina Tognoni) is on the stairs and agrees she does. Billy claims his business dinner turned into drinks. When Phyllis mentions Jabot Billy lies and says he was there. She pretends to believe him. Later, Billy tries to find a game to join and Summer feels guilty about getting him back into gambling. Summer points out to him he was cleaned out of cash. Then Billy gets frustrated trying to free up cash as he gets a text asking if he is joining in the game tonight.

Over at the Athletic Club, Victor Newman (Eric Braeden) learns that he has lost Server Farm as a client and that they have signed a contract with someone else. Up at Hamilton-Winters Group, Neil Winters (Kristoff St. John) informs Tessa Porter (Cait Fairbanks) they are moving their data to a new server company. Neil adds not everyone will be happy about it. He calls Ashley Abbott and invites her to dinner at his place. Neil leaves. Tessa takes a call from Victor Newman who hangs up when he learns Neil is out of the office.

I think Neil and Ashley would make a great couple. They have been friends for quite a while. I’m interested to see where this goes! #YR ❤ pic.twitter.com/4EcRC4kpWd

At Crimson Lights, Mariah Copeland (Camryn Grimes) teases Kyle Abbott about working the grave yard shift. Kyle admits to being drunk and wanting to help his dad. Tessa appears and she and Mariah smile and wave. Kyle tries to get Mariah to ask Tessa out. She says she has been hurt too many times. She feels she is not girlfriend material and Kyle says otherwise. Mariah leaves.

Over at Jabot, Phyllis Summers phones Hilary Curtis (Mishael Morgan) about her situation with Billy Abbott. Ashley Abbott overhears her saying she will go through the company logs. Ashley questions Phyllis about the yacht and Phyllis accuses her of trying to dig up dirt on Billy.

At the Dive Bar, Summer Newman and Mariah Copeland chat. Mariah asks Summer how she attracts guys. Summer advises her that she will have to have more confidence and be hotter. Summer urges her to work on her confidence and she will work on her wardrobe.

Back over at Hamilton-Winters Group, Kyle Abbott arrives and says he is looking for Hilary Curtis. He mentions to Tessa Porter about when he asked her out and points out he never stood a chance because of Mariah Copeland. Tessa says she and Mariah are in a good place now. Kyle thinks it’s too bad they don’t try again.

Ashley Abbott arrives at Neil Winters place. Neil wants them to forget about work and enjoy each others company. Ashley takes a call from Billy Abbott and asks him about the paperwork for the yacht. He tells her he bought it from his personal account and will turn in an invoice. Then Ashley and Neil talk about her helping him. He knows he has risked his relationship with Victor Newman. Neil explains why she is special to him. Suddenly the doorbell rings. Victor demands to know why Neil stabbed him in the back. Ashley jumps in and Neil tells Victor he would have done the same if the position was reversed. Victor tells him Newman will no longer do business with Power Communications. After, Neil and Ashley slow dance and he kisses her.

At the apartment, Billy Abbott calls Phyllis Summers to let her know he will have another late night. He then looks at the yacht receipt and leaves.

At Jabot, Billy Abbott asks Kyle Abbott to take the receipt to accounting and have them reimburse him to his personal account.

Over at Crimson Lights, Phyllis Summers calls the private investigator Hilary Curtis told her about.

Back over at the Athletic Club, Victor Newman gets a text from a person claiming to be J.T. Hellstrom who wants to meet alone with him. And that’s a wrap. Don’t forget to check often with Soap Opera Spy for all your soap needs.