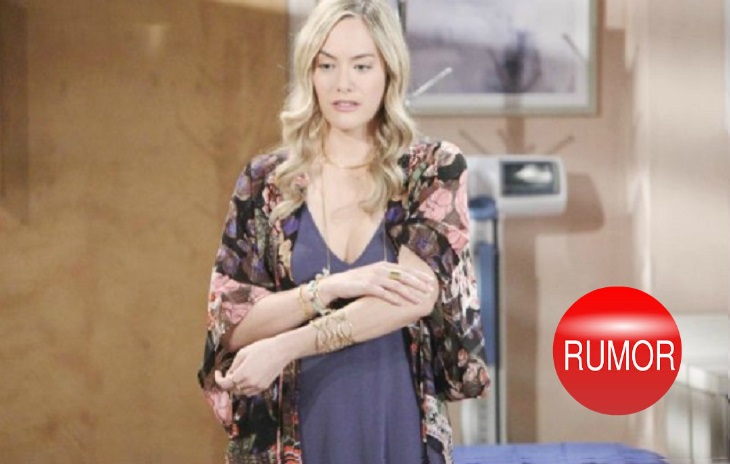 The Bold and the Beautiful rumors indicate that Hope Logan [Annika Noelle] may suffer heartache and lose her baby in coming weeks.

The Bold and the Beautiful fans are well aware the Hope/Liam/Steffy triangle is the top storyline on B&B at the moment. After years of pinning over Liam Spencer [Scott Clifton], it looked like Hope was finally going to wed her longtime love.

However, before they said “I do”, Liam learned that his ex-wife Steffy Forrester [Jacqueline MacInnes Wood] wasn’t in a relationship with his father Bill. Upon hearing the news, Liam quickly rushed to Steffy’s side as she gave birth to their daughter Kelly.

With Liam and Steffy reunited, Hope was left heartbroken once again. But soon had good news to share, she was pregnant with Liam’s baby. News of Hope’s pregnancy now puts Liam in a tough spot as he has to choose which woman to raise a family with.

While Hope is planning to marry Liam and start a family with him, her dreams may be dashed.

Hope’s got a bigger problem to deal with than Steffy. She has a stalker on the loose, whose been posting threatening messages on Hope’s website. Liam, Katie, and Thorne know about the stalker, but have kept the information from Hope. At the moment, the stalker’s identity remains a mystery, although signs are pointing to the new girl Zoe as the culprit.

It’s unclear what Zoe’s motives are for harassing Hope, but with her on the loose and Hope with child, it appears the storyline is headed towards a tragic end. There are two possibilities on how the story may play out. One is that Hope learns about her stalker and the stress of living in fear causes her to miscarry. The other scenario is that Hope has a confrontation with her stalker, which results in an accident and Hope losing her baby.

If Hope does lose her baby, this will be the second time she’s had to grieve the death of a child. Viewers will remember that Hope was pregnant with Wyatt’s baby, but she miscarried when she fell down the steps. The loss of her child made Hope divorce Wyatt Fuller [Darin Brooks], then move to Italy.

Will Hope suffer another heartbreaking loss? If she miscarries her baby, how will this affect her relationship with Liam?

General Hospital Comings and Goings: Brytni Sarpy Is Back