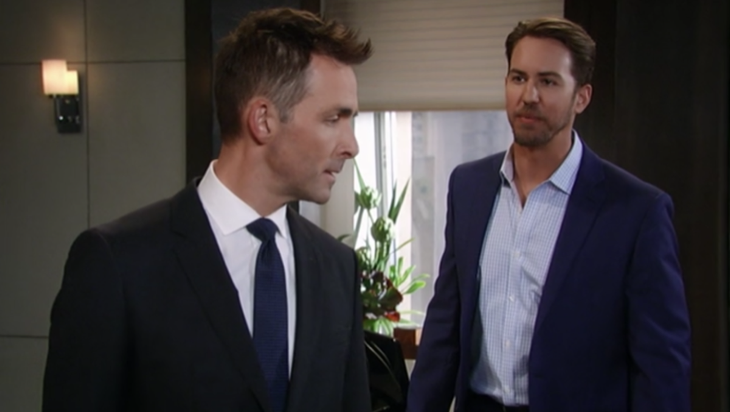 General Hospital spoilers tease that even though Peter August (Wes Ramsey) may not totally drop the charges against Liesl Obrecht (Kathleen Gati) for the torture and kidnapping he endured, he may be able to think of another way to help Valentin Cassadine (James Patrick Stuart).

Liesl has blackmailed Valentin with threatening to tell Nina Reeves (Michelle Stafford) that Sasha Gilmore (Sofia Mattsson) is not really her long-lost daughter and that Valentin has scammed her once again! Valentin wouldn’t tell Peter why he wanted him to drop the charges, but Peter guessed correctly that Liesl must have something very incriminating she’s blackmailing him with!

Even if Peter were to try to drop the charges against Liesl, it may not be that easy. For one thing, Nina was a witness to the whole thing, and truth be told, could be considered an accomplice! If Liesl doesn’t get her full freedom she may divulge that fact and get Nina in trouble, which is something else she could blackmail Valentin with as if the truth about Sasha wasn’t enough.

Peter has Valentin's life in his hands, West Coast. But will he even consider letting Obrecht off the hook for holding him hostage?
A brand-new #GH starts RIGHT NOW on ABC! @wesramsey #GH55 pic.twitter.com/AEP3kV1DOB

If it weren’t for that, Nina would probably insist that Liesl face her charges and be tried for them. Peter’s mother, Anna Devane (Finola Hughes) will not go along with dropping the charges either. The only thing he may be able to do would be to suggest there were mitigating circumstances to ask for mercy in Liesl’s sentencing; that she was not in her right mind because of grief for her only son.

Maybe he could suggest that Liesl is sentenced to community service at Ferncliff; General Hospital viewers have to admit, Liesl would fit right in at Ferncliff! It wouldn’t be ideal for either Liesl or the patients at Ferncliff, but at least it wouldn’t be prison!

If Liesl’s charges aren’t dropped or Peter is not able to get them dropped, this may leave Valentin with no other choice than to try to make Liesl “disappear” or else break her out of jail again and help her to get back to the life of a fugitive.

Even then, Liesl could continue to hold the truth over Valentin’s head about Sasha and continue to control him with it…and Valentin is not someone who likes to be controlled! Keep watching GH and checking General Hospital spoilers frequently to see if Valentin helps Liesl escape, or finds a way to neutralize her!