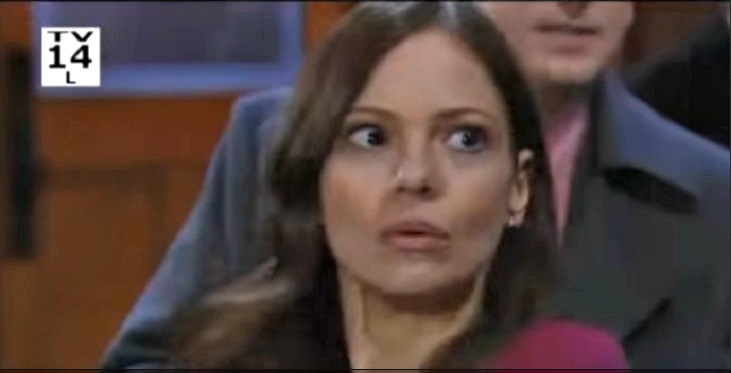 General Hospital (GH) spoilers for Tuesday, February 6 show a lot of drama unfolding as some family reunites bring excitement, while others continue to drive a wedge between parent and child.  Several people attempt to cope with the loss of a loved one while an unexpected arrest happens.  Tuesday’s episode is on GH fans definitely won’t want to miss!

General Hospital spoilers reveal Anna Devane (Finola Hughes) is home alone, in the dark, and is shocked to find someone in her house.  It turns out to be a pleasant surprise when she discovers the person is her beloved daughter, Dr. Robin Scorpio Drake (Kimberly McCullough).

Will Robin be able to help Anna through this tough time of losing dear friend, Nathan West (Ryan Paevey) and deal with her conflicted feelings over the death of the man who tormented her for years, Cesar Faison (Anders Hove)?

Maybe she has spoken too soon since at the same time, at Charlie’s Pub, Julian Jerome (William deVry) seems to be dealing with his own kind of trouble, demanding to know what the hell is going on, while Dr. Kim Nero (Tamara Braun) is sitting is at his bar and several men approach his bar looking for trouble.

Meanwhile, at the PCPD, Detective Dante Falconeri (Dominic Zamprogna) is attempting to deal with his own grief of losing his best friend and Detective partner, Nathan West.  He stands in one of the interrogation rooms admitting he feels like he just lost a brother.

Outside, in the squad room, Police Commissioner Jordan Ashford (Vinessa Antoine) is dealing with drama of her own, when a couple of her officers bring in Stella Henry (Vernee Watson), her boyfriend, Curtis’ (Donnell Turner) aunt, in handcuffs.  Stella is screaming at the officers, demanding that they uncuff her, saying this is ridiculous.  What did Stella do, and will Jordan be forced to process Curtis’ aunt?

General Hospital spoilers reveal Sonny Corinthos (Maurice Benard) is not letting up on his father, Mike Corbin (Max Gail).  He firmly believes that his father stole the money and demands to know what happened to the money.  Will Mike tell Sonny the truth about what really happened to the money, or is he for once innocent and didn’t gamble it away?

Be sure to tune into ABC’s General Hospital (GH) on Tuesday, February 6, 2018 to catch up on all these exciting stories and so much more happening in Port Charles right now.  Check Soap Opera Spy often for updates, news, rumors and spoilers!